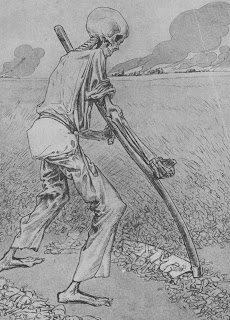 "Our earliest records of the Reaper date back to Greek civilization. Gaia and Uranus were Kronos' parents. Uranus, fearful of all his children including Kronos kept them constrained inside Gaia. Gaia wished to free her children and decided to give Kronos a sickle. With this sickle Kronos eventually castrated his father and bled him to death. Knowing how he had killed his father, once Kronos had children of his own, he feared his fate would be the same. As each child was born he swallowed them one by one.

From ancient folklore and other anthropological sources it is believed that Kronos was a harvest god worshipped by a culture before the Greeks. It is understood that his sickle was used in harvesting grain. Harvest was also associated with death because it signaled the end of the growing season and the beginning of Winter. Time devouring all things was represented poetically by Kronos eating his own children. It was the Greeks very dramatic way of saying nothing lasts forever.

The Grim Reaper wielding a sickle and, at times, an hourglass is directly derived from Kronos. One must understand how important grain was to these ancient civilizations. How horrible the thought of some mystic creature with the power to swipe away their whole harvest with a single swing of the mighty sickle. Not to mention the flock of famished crows, which would accompany such a terrible figure. It undoubtedly symbolized death in an extremely effective way. Though the Grim Reaper poses no real threat to our life, his legacy, which has been handed down from generation to generation, has instilled in us all the fear we need to ensure the desired effect."

There are, of course, different opinions as to where the idea of the Grim Reaper came from, I particularly like the one above, because the historian reminds us that we need perspective when dealing with the subjects level of impact. Today, still, seeing the skeleton holding a sickle is scary. (And cool as a drawing, but if you were actually see the Grim Reaper, I don't think you would grab an air guitar and rock out.) That sickle can be plunged into my head. But to have the resonance of the ability of the sickle to wipe out all grain, all nourishment, doesn't only affect my own perile, but that of my family's and my community's. Perspective. Often when I think about perspective it brings me back to the trip I took to Germany to study castles. One particular castle had extremely tall outer walls, fortifications and parapets, and machicolations for pouring out hot tar onto offending armies. I said to my friend, "Wow they must have been holding gold, diamonds or some important Dignitary." And she said, "No, something more important than that, Salt!" Salt? I immediately pictured a swarm of angry housewives with mixing bowls and Chefs with large wooden spoons pounding on the outer walls of the castle, demanding salt for their souffle. At the time, I knew about, but did not realize the importance of salting the meats, to keep them from spoiling. It wasn't just for seasoning it WAS the preserver of food, the preserver of life itself!
Posted by The Fool Machine Collective at 1:33 PM 3 comments: