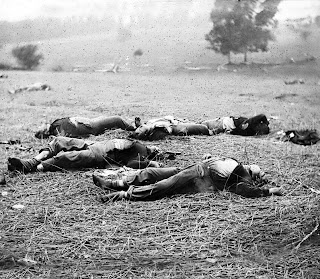 I'm reading about death during the Civil War right now.

"The number of soldiers who died between 1861 and 1865, an estimated 620,000, is approximately equal to the total American fatalities in the Revolution, the War of 1812, the Mexican War, the Spanish-American War, World War I, World War II, and the Korean War combined. The Civil War's rate of death, its incidence in comparison with the size of the American population, was six times that of World War II.  A similar rate, about 2 percent, in the United States today would mean six million fatalities.  As the new southern nation struggled for survival against a wealthier and more populous enemy, its death toll reflected the disproportionate strain on its human capital.  Confederate men died at a rate three times that of their Yankee counterparts; one in five white southern men of military age did not survive the Civil War."

-Drew Gilpin Faust, "This Republic of Suffering: Death and the American Civil War"

And that's not including civilian deaths.  The Civil War changed how Americans, and by extension, the world, viewed death.  It forever altered the landscape of how we approach and deal with death.  More soon...
Posted by Dinabear at 8:59 AM 1 comment: