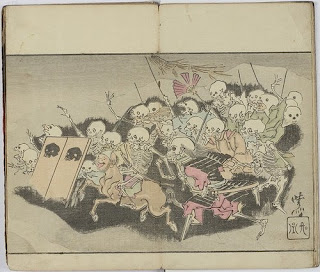 Posted by Dinabear at 7:32 AM No comments: 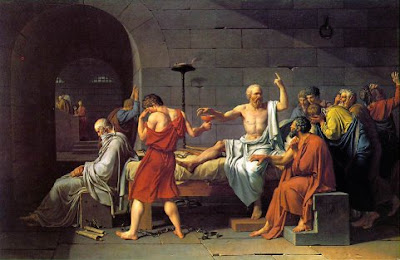 I stumbled upon the Stanford Encyclopedia of Philosophy's section on death. I have been both intrigued and overwhelmed by it. Here is my relatively brief synopsis/regurgitation of it. To investigate these ideas more fully go HERE.
The Stanford Encyclopedia brings up six quandaries involving death.
1) What constitutes a person's death? Because the concept of life is not completely pinned down it is difficult to determine when exactly life ends? Here we must begin to distinguish between the end of a corporal being and the end of a psychological being. These deaths (of the corporal being, of the psychological being) do not necessarily coincide.
2) Challenges of the harm thesis of death. The harm thesis of death is the fair assumption that death causes a person harm. The Stanford Encyclopedia raises three challanges against this thesis.
a) The first challenge is known as the symmetry argument. Because we do not think of the non-existence preceding our births as being harmful to us it is irrational to consider the non-existence after our deaths as being harmful.
b) The second challenge is known as the timing puzzle. It is reasonable to presume that death or posthumous events may cause harm only if:
-there is a subject that is harmed.
-there is a harm that the subject incurs.
-there is a time in which harm is incurred by the subject.
We have to ask ourselves, when is the harm incurred? If it is incurred before we die, then there is a clear subject. However, it is difficult to see how the harm is inflicted onto the subject before the event (death). If the harm occurs after we die then there is no subject that is harmed (because the subject ceases to exist).
One might be inclined to say that the harm is incurred at the moment of death. However, such a moment is difficult to pin down. As Epicurus has stated "Death..., the most awful of evils, is nothing to us, seeing that, when we are, death is not come, and, when death is come, we are not."
c) The third challenges addresses a variation on the harm thesis known as the posthumous harm thesis. This assumes that harm can be done to a person posthumously. The challenge is known as the immunity argument. This claims that the posthumous harm thesis is irrational because there is no subject to incur the harm posthumously. In other words, death leaves us invincible to further harm.
3) Support of the Harm thesis would consist of the idea that the harm incurred is not in the form of some kind of pain.
4) What is the misfortune of death? Presumably death harms us by precluding us of certain goods and pleasures. However, we are not necessarily harmed by states of affairs that block our access to goods and pleasures. For instance, I am not a rock star. So my state of affairs (not being a rock star) blocks me from the goods and pleasures of living like a rock star. However, we would not say that I am harmed by this state of affairs. We might tighten our definition of the harm imposed by death by saying that it precludes us of certain goods and pleasures that we would have had. Unfortunately, it is difficult to say with any certainty what goods and pleasures we would have had if only.
5) Are all deaths a misfortune? In this section, the Stanford Encyclopedia of Philosophy concerns itself with a dispute between Thomas Nagel who says that death is always an evil because continued life always makes good things accessible and Bernard Williams who argues that it is a good thing that we are not immortal since we can not stay meaningfully attached to life forever.
6) Can the harm of death be reduced? Presumably it is possible to adjust our concepts and attitudes in order to make the passing of death harmless. Doing so would require us to alter our desires as to not have any interests that death would get in the way of. However, such a condition would leave us with an "impoverished conception of our interests" and make life basically not worth living.
Posted by pbsebastian at 9:25 PM No comments: 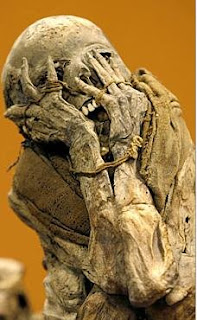 At our last meeting for Fear, we discussed the idea of a main character sitting center, stagnant, in fear of moving, the fear of life. This fear of life is explored through fears of death. This "character" is tricked, manipulated, persuaded to engage in tangible and abstract activities which all eventually lead to his demise. We want these fears to be planted in our own experiences and imagined dreads; the fears we overcome to prevent ourselves from hiding in a hole in seclusion. We thought a good way to approach this to vary experiences was to first find outlines for fears of death. I had talked about the idea that all fears lead to the fear of death. We thought this was a good beginning point to generate stories. So I pose that in the comments of this post that anyone can create what I will now refer to as Fearisms. Fearisms are kind of like syllogisms that lead all fears to death. I acknowledge that these are purely based on opinion and that one fear may lead to another fear in one person's case but not in another. This is also with the knowledge that fear of death, in itself, may actually stem from another fear, perhaps of the unknown, or fear of hell, or fear of their own transgressions. So to start it off here is one that I worked out:

Is the Fear of Maintaining Success

Is the fear of losing personal freedom to overwhelming responsibility

Is the fear of the finitude of our time.

Is the fear of Death

Posted by The Fool Machine Collective at 9:57 AM 6 comments: