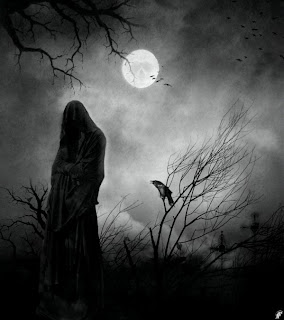 I don't know if someone already posted about this, but I recently came across the following text:

In Paris there is a "cabaret philosophique" called Nothingness (Le Neant), which for a certain kind of playful grotesquerie is probably unmatched in the world. Everything in this cabaret is designed to remind the customers of death, including their own. They sit at coffins instead of tables, in a palatial room hung with skeletal remains and with various texts on the nature of death. A master of ceremonies dressed as a priest makes the rounds, reminding the customers individually about the ominous pallor of their complexions. One customer is generally persuaded to get into a coffin and be wrapped up to the neck in a shroud. What fun for affluent society!

--James Luther Adams, "The Grotesque and Our Future" from The Grotesque in Art and Literature, Theological Reflections
Posted by Dinabear at 5:23 PM 2 comments: