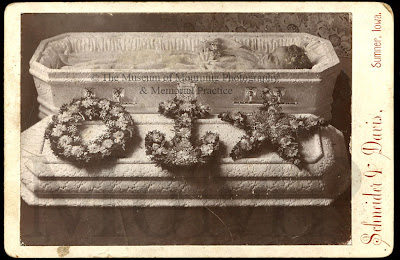 Anthony at the MoMP was quick to point out the meaning of various symbols discovered in his photos. This made me aware of the large amount of symbols used in funerals and burials. I just never thought of it. I looked into it further and found some gems of memorial symbols. (some of which might come in handy in a covert cemetery trip)

Wheat refers to life and the Scythe refers to death. The symbols of wheat and the scythe invokes a previous discussion that we had concerning the Grim Reaper. We discussed the Scythe and to some degree we discussed wheat as as symbol of life. In this context it would make sense that the Reaper would carry a scythe, a tool to cut down the harvest, to cut down a more celestial harvest.

Symbols that refer to the affect on the family are striking to me. Perhaps because it concerns the living. Some tombstones may have a broken column. this refers to the passing of a head of a family. Presumably a Patriarch or Matriarch. A broken ring refers to the family's circle being undone. The death of an only child. The last of a line. Referring to what has not and will not continue. A weeping willow refers to perpetual mourning.

The symbol of an anchor often refers to hope. One website attributed this to Pope Clement who was tied to an anchor and drowned. Apparently the anchor was a common hidden symbol, a disguised cross. Often the chain is broken. An anchor may also be used to mark the grave of a sea faring person. However, some sites disregard this meaning entirely.

There are many references to the resurrection or eternal life. This is understandable considering that these concepts provide much hope for the mourning. An angle flying, birds, crown, a light, a torch, a star, a rooster, a lion, trumpets, bees, shell and crown all refer to the resurrection or eternal life. I am not aware of all of the subtleties between these symbols. To begin with we can make the distinction between the resurrection and eternal life. The rooster, lion and the trumpets no doubt refer to the resurrection. The trumpets and lion refers to the second coming of Christ. The rooster refers to the awakening of the dead. The angle flying, bird, crown, light, star, and torch presumably refer to eternal life as opposed to the resurrection specifically. The crown could refer to God and that the deceased is closer to God and the service of God. I would place the light, star, and torch in a category together; a continued shine of the spirit. I am at a loss as to what to make of the bees and shell.
Posted by pbsebastian at 9:18 PM

Good work Peter. I remember in Edinburgh seeing a gravestone with a an owl tipped over on top of a pile of books. I found this fairly unique and thought provoking. I have seen owls before on graves, but I have never seen one tipped over before. I assumed this was the death of a great literary enthusiast but I can't be sure.

Also I created a post about my experience at Anthony's museum but my computer ate it. I know it sounds like a lousy excuse, but that's what I get for 100 percent passion and zero percent forethought. SAVE SAVE SAVE! I will tackle it again when I am back from New York.