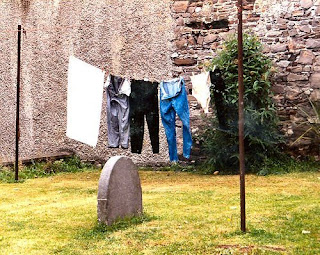 Since I was invited to join this blog, I've been reluctant to post or to dwell too long reading these entries. Not because they're not fascinating -- but because I'm realizing that I'm sick to death of death.

I don't like to pick it apart as an academic subject, I can't stomach most artistic takes on it (movies, books, TV, theater -- but especially movies); in general, I can't treat it impartially, as if it were somehow separate from me, as a thing to dissect and ponder.

And I'm wondering, is this because of my personal experiences with death? Am I less objective, less impartially curious, because I've just been too close (as a witness, not a participant) to the dying process? Can I ever connect to it again in a way that is observational -- and somewhat aesthetically enjoyable?

So, I'm interested to know the personal death histories of this particular Death Squad. A sort of Death Purity test, if you will. Who has:

...had an acquaintance (not-close friend) or distant relative die?

...had someone in their immediate family (sibling, parent, grandparent) die?

...been to a funeral or funerals? If so, how many?

...been on the verge of death themselves?

Thanks in advance for your answers.
Posted by Claff at 9:21 AM

...had an acquaintance (not-close friend) or distant relative die?
Yes

...had a close friend or relative die?
Mmmm. Not terribly close.

...had someone in their immediate family (sibling, parent, grandparent) die?
Yes. Three out of four during my lifetime.

...been to a funeral or funerals? If so, how many?
About a half dozen.

...watched somebody die?
Not up close.

...been on the verge of death themselves?
Mmmm. Yeah. I was in a coma as a result of a grand mal seizure when I was 20.

Other relevant qualifications: I have delivered two eulogies and have previously sinned against art by casting an academic eye towards the topics of folly and humor.

...had an acquaintance (not-close friend) or distant relative die?
Yes.

...had a close friend or relative die?
Yes.

...had someone in their immediate family (sibling, parent, grandparent) die?
four of my five grandparents have passed.

...been to a funeral or funerals? If so, how many?
yes, but not very many. I think I've been to three funerals.

...watched somebody die?
no.

...been on the verge of death themselves?
yes and no. My dentist once sent me to an oral surgeon because of a little something at the back of my throat. The oral surgeon told me that it was probably a tumor. A bad one lodged close to my lymph node. After grilling me about my drug, drinking and smoking habits he told me that it was imperative that it be removed immediately and scheduled me for an appointment in a months time. My parents had a surgeon friend who was able to meet me sooner. Although this new surgeon was skeptical of the danger posed by this little thing in the back of my throat he removed it and sent it to a biopsy. It turned out to be nothing.

Although, it turns out that I wasn't actually on the verge of death (or more specifically on the verge of a cancer fight) the event forced me to deal with my own mortality and it gave me some perspective. Regardless, I don't see that fucking dentist any more.

...had an acquaintance (not-close friend) or distant relative die?
Yes

...had a close friend or relative die?
Yes-most recently, a former co-worker committed suicide-such a strange feeling to find that out about someone you knew.

...had someone in their immediate family (sibling, parent, grandparent) die?
Yes-three out of four grandparents.

...been to a funeral or funerals? If so, how many?
Yup - too many to count! I'd estimate about 12 in the past six years, both for family and being there for friends.

...watched somebody die?
Not a person - but I had my pet rabbit die in my arms when I was 11 years old during a thunderstorm - it got scared, had a heart attack while I was holding it, and passed on.

...been on the verge of death themselves?
Not that I know of!

Sorry to hear about your dentist ordeal, Peter! Sometimes one doesn't want to have perspective, but it still knocks on your door at the most random times...

...had an acquaintance (not-close friend) or distant relative die?
Yes.

My elementary school friend drowned when he fell out of a boat. I actually lost two friends like this when I was younger.

...had a close friend or relative die?
Yes- My Friend Peter hung himself in New Orleans. I write about it all the time. I flew to Maine for the Wake and Funeral. I talk to him still when I am alone. He makes me feel like William Blake talking to Angels in his garden

...had someone in their immediate family (sibling, parent, grandparent) die?
Yes-All four grandparents. I never knew my father's parents. My Grandfather died when I was 8. I wrote about it in a play called: The Earthly Burial Of a Monologue box. My family wouldn't let me go to the funeral, I stayed with my older cousin and learned how to yoyo. I can't pick up a yo yo without thinking of him. My Grandmother died while I was on tour in Europe. I often feel bad that I wasn't around to help my mother. My father died. A long painful death that took over two years. I often dream of him. I ask why he is here, because he is dead.

...been to a funeral or funerals? If so, how many?
Oddly I have not been to too many funerals. Three in all.

...watched somebody die?
I watched my cat die, as I was taking him to the vet. He reached up towards me in the van, crying.
My father died about an hour after I had left him. He said, "I just want to die now."

...been on the verge of death themselves?
when I was younger I was a hypochondriac, I was never close to death yet always thought I was. I have done alot of stupid stunts in my life that could have killed me. I did a stunt when I was in highschool on my bike. A friend did it right after I did and he broke his spine. I don't know where he is now. But 25 years ago, he could not walk or sit.

had an acquaintance (not-close friend) or distant relative die?

Yes. Two of my uncles have died in the past two years. One uncle I rarely saw, and his death made me really sad, and the other I saw often and still have yet to call my cousin with condolensces.

...had someone in their immediate family (sibling, parent, grandparent) die?
All four of my grandparents are gone.

...been to a funeral or funerals? If so, how many?
three seems to be the lucky number for this squad. The hardest was watching one of my mentors bury her husband.

...watched somebody die? No.

...been on the verge of death themselves? No.

I guess I should answer this myself:

...had an acquaintance (not-close friend) or distant relative die?
Yes, quite a few. The most mind-bending was my best friend's mother's best friend, Cora, who was on the first plane that went into the Twin Towers.

...had a close friend or relative die?
Yes, my uncle, and recently, a very good friend from high school.

...had someone in their immediate family (sibling, parent, grandparent) die?
Yes, two grandparents (the other two had passed on before I was born), and my father.

...been to a funeral or funerals? If so, how many?
Three (you're right, Tanya): My grandmother, my dad, and my drama teacher from high school.

...watched somebody die?
Yes, my dad.

...been on the verge of death themselves?
No.

Hello. This post is likeable, and your blog is very interesting, congratulations :-). I will add in my blogroll =). If possible gives a last there on my blog, it is about the Monitor de LCD, I hope you enjoy. The address is http://monitor-de-lcd.blogspot.com. A hug.

...had an acquaintance (not-close friend) or distant relative die?
Yes. A few old classmates, lots of my parent's cousins.

...had a close friend or relative die?
Yes. From my family, two aunts and three cousins. When I was 16, three of my good school friends died in a car wreck and since graduating another two killed themselves.

...had someone in their immediate family (sibling, parent, grandparent) die?
Yes - all grandparents

...been to a funeral or funerals? If so, how many?
Eight. Too many, and not even a multiple of three.

...watched somebody die?
Two people. My maternal grandfather and the mother of a friend from high school.

...been on the verge of death themselves?
I'm not sure. When I went into the hospital for my collapsed lung, I was in really bad shape and all the ER docs would say things like "If you had decided that this was just heart burn..." and then trail off cryptically. And the night before my surgery, they woke me and rushed me to surgery a few hours early because they said my pulse-ox (?) was dangerously low. I felt ten kinds of shitty to be sure but I'm not sure I ever felt on the verge of death.

...had an acquaintance (not-close friend) or distant relative die?
a great aunt (also, her husband might be dead, but I'm not sure). There are probably more distant relatives. The husband (2nd) of another great aunt I just found out got hit by a truck while driving his golf-cart across the street, in Arizona. Barely knew him. My mom and I both laughed.

...had a close friend or relative die?
No.

...been to a funeral or funerals? If so, how many?
The grand-dad of my ex-girlfriend. Was supposed to be an open casket but the son insisted on it being closed. Maybe another when I was younger.

...watched somebody die?
No.

...been on the verge of death themselves?
I had cancer but no one ever told me I was going to die. I never felt "on the verge" but I did think/talk to myself about how "I did not want to die."

i was dead for the last few years in the coffin of my body . i can hardly tell how exactly it was .. i cant tel why and what was going on . . i was just dead. i cant remember. . just few years. the blog is a sign of resurrection and a document of some dead-time moments. . but for now i also notice "I'm sick to death of death" ..
thanks for this blog