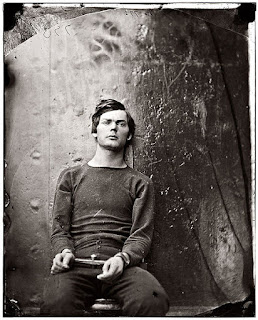 In 1865, young Lewis Payne tried to assassinate Secretary of State W.H. Seward. Alexander Gardner photographed him in his cell, where he was waiting to be hanged. The photograph is handsome, as is the boy: that is the studium. But the punctum is: he is going to die. I read at the same time: This will be and this has been; I observe with horror an anterior future of which death is the stake. By giving me the absolute past of the pose (aorist), the photograph tells me death in the future. What pricks me is the discovery of this equivalence. In front of the photograph of my mother as a child, I tell myself: she is going to die: I shudder, like Winnicott's psychotic patient, over a catastrophe which has already occurred. Whether or not the subject is already dead, every photograph is this catastrophe.

- Roland Barthes, Camera Lucida
Posted by Dinabear at 8:06 AM

Death it seems, like life, can be cyclical:
http://thechaosofdeath.blogspot.com/2007/12/chapter-38-flat-death.html

This is a haunting portrait. Although the photo was taken almost 150 years ago, it has a strangely contemporary feel. It is as if Payne looks out at us for all the world like a rock or movie star of the 21st century...

My thoughts exactly, something about it strikes a comtemporary or more accruately, a timeless feeling.