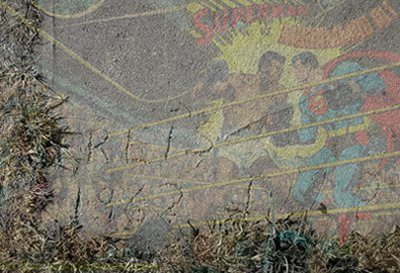 The air tastes like iron and rust and sugar. The carpet dirt waits. The face on the wall is peeling and faded, but the disappointment in its eyes is not abated by the blood trickling down from forehead to sandals.

Healthy and easy recipes are bound up with digested american classics and stories of courage, soft- and hard- covered, and set into the headboard of the bed like lungs in a ribcage. Two windows, four walls, a closet, and a door.

The living room is not. The furniture is large, boxy, and wooden. The end tables are end cabinets, packed with losing magazines and papers. As the World Turns plays on an oak encased color-TV. A sweating tumbler of iced-tea and bourbon sits by a homemade ashtray with a golf ball handle on top of a squat table behind a loveseat parked three feet from the TV that holds the sleeping form of Cancer. On the edge of the puffy couch opposite the loveseat sits Cancer, snapping off the ends of green beans (the ends go in a trash bag, the middles in the metal colander sitting on the coffee table) with her daughter Pneumonia who sits cross-legged on the floor on the other side of the table. On the couch next to Cancer sits Cancer, wearing a moustache and a hat cocked at a jaunty angle. The gauzy white curtains of the bay window over the couch let in just enough dry and dusty sunlight to catch the eyes of Crib Death lying on a bed of pillows on a blue chair. Hepatitis-B and Overdose sit around the formica table in the kitchen picken’ at the crab Suicide and Suicide pulled out of the bay.

Next to the kitchen the dryer spins and from the couch in the living room I can hear the zipper on my grey sweatshirt tapping the door.

Smoke. Splinters jut out of shoddy plywood, painted white as an afterthought, looking as though a chain of magnifying lenses extend from the wood to the eye of the viewer, giving the impression that the slightest forward movement would impale the eye, but upon stepping back the effect dissipates into the haze that caused it. Smoke. An arched ceiling, a single window, a curtain covering a hole cut into the side of the plywood that creates the 5 x 5 room in the corner of the attic. Smoke. A mattress lies flat in the center, sinking into the floor. Cutting through the dirty window is the sort of moonlight that one sees late on the night they realize that one day they will die. Muhammad Ali and Superman stand toe-to-toe in the ring, frozen into their final blows, barely illuminated by the single red glowing ember that freezes and binds everything in the room, trapping it in the smoke.