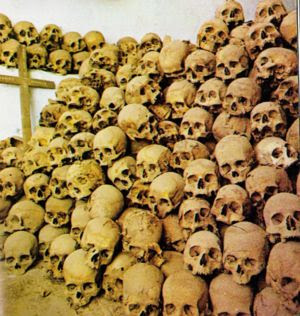 I wanted to get a post up, and I've found myself at the computer, so here are some things I've underlined from the big book of death that I found interesting or imagistic, in no particular order, with my own italics...

"...the signs most often mentioned to indicate imminent death in the Middle Ages were signs that today we would call natural: an obvious, routine observation of the common and familiar facts of everyday life."

"The dying person must be the center of a group of people."

"Ovid relates that on the day of the Feralia, the Day of the Dead, the Romans sacrificed to Tacita, the mute goddess, a fish with its mouth sewn."

"The man of the seventeenth century exhibits a lesser degree of sensitivity [than that of our own] and demonstrates in torture and death a resignation and endurance that we would find astonishing."

"We read that there are many whom the devil has dug up and flung far from the consecrated land."

"...no more than a block of stone laid over them (imblocati [yes, there's a Latin word for that])to preserve the appearance of the land."

In these first chapters, what I'm thinking about most is the proximity of the dead, as in there seems to be a lot of meaning put in where your bones are laid when you're done; what the meaning is when you're placed closer to a church wall or even inside a church itself, with people walking on you every Sunday and how that's more glorious than being in a field, in a mass grave, in the company of people in your same situation.
Posted by Kurt Chiang at 8:10 PM