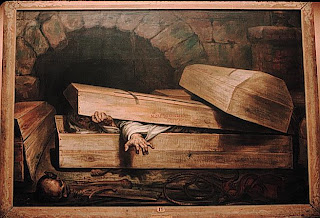 For a long time people had feared premature burial, and ancient wisdom precautions for avoiding premature burial. CONCLAMATIO was the calling three times in a loud voice the name of the person presumed to be dead. Conclamatio was still in use in the time of Tolstoi; the doctor called his name three times in the railway station where he lay dying. Even today, church protocol dictates that when the pope is on his deathbed, he must be called three times by his Christian name.
- Phillipe Aires, The Hour Of Our Death

I would like to do an experiment with the audience boxes we are considering that plays with the idea of being buried alive by being restricted while watching: maybe some of the boxes can have scratches in them, like someone trying to claw their way out. Maybe we have parts that go completely black, and then the sound systems in the boxes cause the sound outside to be muffled in tone.
Posted by The Fool Machine Collective at 1:26 PM

There's an anecdote about where the term "dead-ringer" comes from. Anyone know it? I remember it vaguely having to with people going into death-like comas, being buried, but then waking up buried alive. A contraption was invented, which was a bell with a string on it, and the string was fed down into the coffin, so that if someone was only fake-dead, they'd be able to signal for help. The "dead-ringer" was the watchman at the cemetary, waiting for the bells to ring, and then dig them up.

This was a story I heard Tom Waits tell, so who knows if it's true.