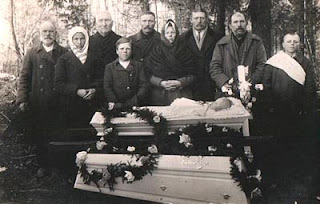 From the invention of the camera arose the need to record important familial events, including funerals. This website has a good handful of them, and claims that they were bid on through Ebay. I searched on Ebay and sure enough, you can bid on and win the photo of a funeral for some long forgotten relative. Or a photo that claims to be from the funeral of Sharon Tate. That seems very sad to me. It is fascinating, but at the same time very private. I find I can't look at these photos for very long before I feel like I am intruding or something. I am, however, really interested in this need to preserve the funeral moment---people did it often in the late 19th and early 20th-centuries, particularly for their children. 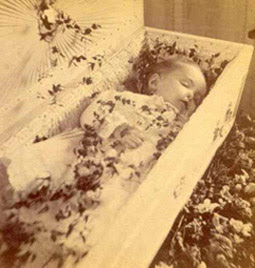 I thought that this was something only of its time--that by the mid-20th century people no longer took photographs of their deceased loved ones laid out before burial. I thought that in time, once the camera became more a part of everyday life, people no longer wanted to use it to acknowledge death. Then I did a Google search this is what came up: 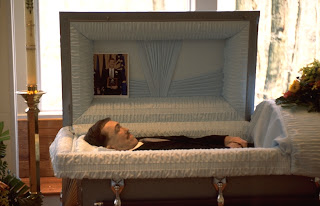 This photo was taken in 2000. It can be found on this website, where it is joined by hundreds of other photos from the same funeral. A lot of the photos are of the flowers, and different angle shots of some of the mourners by the coffin. Check it out, it's strange, intriguing, and freaky.

P.S. Thanks for the invite. Here all my morbid interests will be unleashed.
Posted by Dinabear at 7:20 AM