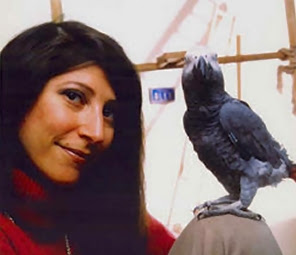 These were the last words in a conversation between a theoretical chemist and her 31 year-old parrot, Alex. He died this year on September 6th. Alex had a vocabulary of 150 words, knew the names of 50 objects and could describe various color and shape patterns of objects, even if he had never seen the combination of characteristics before. He understood the concepts of bigger, smaller, same, and different. He would apologize to his trainers/collaborators if he made a mistake.

This is from the Obituary column in a late September issue of The Economist.

This post is credited to Jessica, as this is her specific interest: animals and death.
Posted by Kurt Chiang at 9:21 PM