Julia Buccola Petta died in 1921 of childbirth. She is buried at Mount Carmel cemetery in Hillside, Illinois. I have visited her grave. She was 29 when she died; her child was stillborn and was buried with her. If you go to Mount Carmel you will see her monument, a reproduction of her wedding photo in sculpted form: 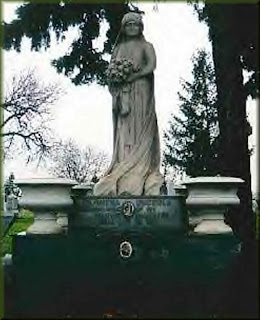 It is remarkably accurate. On her sculpted wrist is a watch, just like the photo from her wedding day. Julia Buccola Petta is also known as "The Italian Bride" or "The Incorruptible Italian Bride." She is the subject of ghost lore, based mostly in fact: after her death, her mother, Philomena, began having vivid dreams of her daughter calling out to her and begging her to exhume her body. Another version involves Julia telling her mother that she was still alive. When the dreams did not stop, Philomena requested that her daughter's body be exhumed, but the Catholic Church would not allow it. It took her about six years to receive permission from the church to bring her daughter's body up from the earth. When they opened her coffin, this is what they saw: 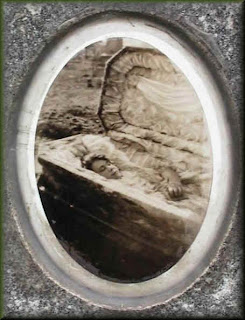 Julia's body was perfectly preserved. They took this photograph of her body, then placed her back in the ground. If you visit Julia's grave, you will see her monument, her wedding photo secured to the base, and the photo from her exhumation beneath that. Incorruptible bodies are normally associated with Catholic saints, the most famous of which is Saint Bernadette of France. Julia Buccola Petta was never canonized but since her exhumation people have claimed to see a woman in a white dress near her grave. She is not a saint, but a myth, and whether her body is still incorruptible is left to speculation.

When I visited her grave, I was fifteen. My understanding of the story at the time was that she had been buried alive, and I looked closely at the photo above to see if the ceiling of the coffin had been scraped away by the panicked fingers of the Italian Bride. I was there with my cousins, and my mom and her sister. For some reason on that sunny spring day almost 15 years ago we thought it would be fun to visit the local cemeteries; our goal was to find the grave of Al Capone, which after much searching we did. It is small, flat, and humble. Not what you would expect.

While at Mount Carmel cemetery my cousin Maggie and I were so absorbed in visiting Julia's grave that we did not notice that everyone left, that in fact they had all gotten in the car and were driving away. They didn't forget us; they just thought it would be funny. We totally freaked out. We were running as fast as we could, yelling, visions of the gates of the cemetery suddenly closing and keeping us trapped between the dead and the living. No doubt Julia would appear with an inviting hand to stay there with her forever.

We got through the gates, though, and the car stopped. They thought it was the funniest thing, and as we caught our breath and our hearts we knew we would need about ten years to find the humor in it. Now, yes, when it comes up in conversation we shake our heads and laugh. But back then, I was terrified. I believed in ghosts when I was fifteen, and I still do. I've read Chicago Haunts all the way through. I've also read Graveyards of Chicago, a great guide for all Chicago-area cemeteries. And I highly recommend visiting a cemetery; there is such beautiful art there, and so many forgotten lives. I visit them because no one else will.
Posted by Dinabear at 8:18 AM