The Philosophy of Death by Shelly Kagan 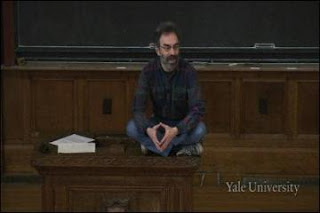 The Philosophy of Death lectures by Shelly Kagan

I have always been fascinated with death. I used to (and still) have gothic friends. I always admired the ones that had a humor to their commitment to their interpretation of death, but my fascination for death was very different from most of theirs. For some reason or another many gothics become fascinated with "living death." And ultimately my interest has more to do with trying to remove all false perceptions I have of my own immortality, to face death without fear, so that I can attempt to live more honestly. A life that I feel can be richer, perhaps in ways that are not always pleasant, but more involved - knowing, for real, that this IS THIS, and this life that I know to be "me" pretty much is ONLY THIS for now. I fell upon these lectures by Shelly Kagan. It is amazing what you can watch for free on the internet. And this is basically a whole semester's course in the study of death... for FREE. This man frustrated me on many points, but I gotta give him his due. He carries you on the journey, giving you (at leas an illusory) chance to claim otherwise than he believes. He spends about half the lectures ruling out the possibility of a soul and focuses in on a physicalist point of view. This building of his argument is the most fascinating of the lectures, and continues through about half. When we as listeners grow to accept his physicalist point of view (for the sake of questioning) He then proceeds to figure out what makes death "bad," and what is a quality life, and why do we want such a thing? The lectures are about an hour each. I suggest giving them a try, instead of watching one of those sitcom's each night, or the endless amount of Cat videos on youtube, I see the allure of the aforementioned modes of entertainment, but I recommend bypassing those for awhile and buckle your seatbelt and allow this man to erase the existence of the soul. (Although, since I have also been listening to Existential philosophy, I am more skeptical to believe that being rational means that it is true.)

Posted by The Fool Machine Collective at 2:13 AM

See the book _The Soul Hypothesis_ for a valuable counterpoint. It contains essays from a number of contemporary philosophers, psychologists, and even a linguist on reasons to believe in the reality of souls.

Thanks Anonymous. I'll look into the book right now!