NPR is virtually a gold mine of death-related information. Yesterday, Eight Forty-Eight reported on Ghost Bikes, a "junker bike that has been painted stark white and afixed to the site where a cyclist has been hit or killed by a car driver. Ghostbikes are intended to be memorials for the fallen and reminders to everyone to SHARE THE ROAD with one another." 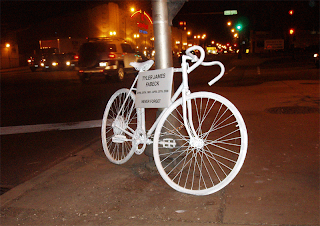 I've never seen a Ghost Bike. I think I would know if I had: it's bright white frame, like a ghost itself, would have inevitably caught my eye. I also think it's unfortunate that I never knew about them until now. It's a fitting, wonderful memorial to those fallen, and a reminder to all how important it is to be safe.

This is a prime example of the evolution of death practices. As more and more people ride, more get hit, and as they get hit, they are memorialized for what they were: cyclists.

There is also an annual Ride of Silence that occurs across the country to honor those injured or killed while riding a bike. We just missed this year's ride, it happened on Wednesday night. 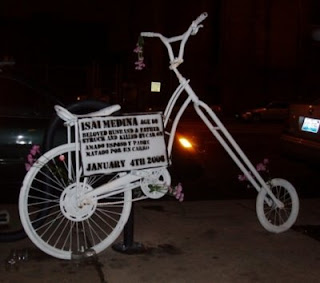 I can barely look at the pictures of the bikes. It bothers me in the way that cemeteries do not...I think with cemeteries we're so removed from the actual body, or the action of death, whereas with the bikes...the circumstance is right there, in front of your face, easily imaginable. It reminds me that with many of our death rituals, we are provided with the opportunity to mourn, but we still remove ourselves as much as possible from the action of death. Kind of like how meat at the Jewel Osco is a far cry from the original carcass.

hi. . i ve seen a similar proiject in vienna (austria) .. white bike at a bridge . the title was ghost bike ..
ideas like to be shared

Thanks for writing this.