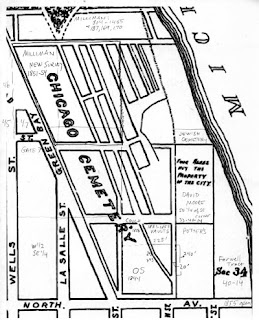 I have been interested in exploring the history of Chicago's City Cemetery, the city's first major cemetery located in what is today Lincoln Park. It was difficult to find much of anything about City Cemetery--until this website launched. It's creator, Pamela Bannos, was interviewed on 848 this morning.

An entire website dedicated to the history of Chicago's city cemetery in 19th century Lincoln Park. Check it out. It's awesome. From the website:

From 1843 through 1859, the only graveyards in the city of Chicago were in the area of the southern edge of Lincoln Park and the neighborhood now known as the Gold Coast. This cemetery cluster consisted of the City Cemetery, the Potter’s Field, the Jewish Cemetery and the Catholic Cemetery. During these sixteen years of exclusive use, there were more than 20,000 interments.

In 1859, with the opening of Rosehill Cemetery, followed the next year by the Graceland and Calvary Cemeteries, there became additional options for burials of the deceased in the fast-growing city. In 1866, further burials in the cemeteries by the lake were prohibited. From 1860 through that time, an additional 15,000 interments had taken place in those locations.

(Burial by the lake was prohibited because graves were filling with water--as graves were dug, the water would start coming in after about 4 feet.)

In 1866, it was determined that city officials had illegally acquired a 12-acre parcel of land within the cemetery grounds, known as the Milliman Tract. For the next two years, the remains within the graves in this area were relocated to other cemeteries and the land was returned to its rightful owners. The two-year disinterment period of this section of the 57-acre City Cemetery seems to be where the history of the cemeteries’ removals becomes confused.

In 1869, the city officials passed control of the cemetery grounds, along with the northern 50-acres of unused area of the cemetery property, already used as a park, to the Lincoln Park Commissioners. The Commissioners spent the next few years landscaping the park grounds north of the City Cemetery.

In 1872, the potter’s field disinterments commenced. The Chicago Tribune claimed the potter’s field disinterments occurred in 25 days, even though by their own calculations at the rate they estimated, it should have taken more than a year. (The ten assigned gravediggers were estimated to be able to disinter 20 bodies per day.) There were also nearly 4,000 Confederate prisoners buried in the potter’s field. In his 1999 book, To Die In Chicago, George Levy writes that many Confederate soldiers were likely left buried in what are today’s baseball fields.

In 1874, The Lincoln Park Commissioners condemned the grounds of the unclaimed cemetery lots, incorporating that area into the park. Fewer than 1,000 disinterments occurred after this point, leaving thousands buried in the park grounds.

In 1875, The Lincoln Park Commissioners removed the 150 remaining headstones with their graves to a one-acre fenced area within the park. In 1883, the stones were removed, leaving those graves in the park.

In 1877, the Chicago Tribune reported that all remaining vestiges of the City Cemetery had been removed except for the Couch Tomb, which was deemed too expensive to move. The newspaper wrote, "....the Commissioners have determined to let it remain, and plant trees thickly around it" to hide it from view.

In 1884, A.T. Andreas published the second volume of his three-volume History of Chicago. In addressing the closing of the City Cemetery, he misrepresented the 12-acre Milliman Tract disinterments, stating that those exhumations represented the entire 57-acre City Cemetery.

In 1899, the Chicago Tribune published the first story about unexpectedly finding skeletal remains in Lincoln Park. By this time, it appears that the presumption that the cemeteries had been totally vacated was incorrect.
Posted by Dinabear at 8:42 AM

This is amazing! No wonder Lincoln Park's so creepy. I'm a fan of your blog.

There's also the case of the remains in Dunning Square - which I remember vividly from growing up around there! There's a shopping centre and condos there now (it's at Irving Park and Narragansett.)

That site used to be the 'Cook County Poor Farm and Insane Asylum' - and was also the site of where mass burials took place of the remains from the people who perished in the Chicago Fire. I wish I had the article still, but I remember reading about people found with 'perfectly preserved handlebar moustaches.'

There's some info in here.
http://books.google.com/books?id=i2WOQcBx0SwC&pg=PA87&lpg=PA87&dq=dunning+square+remains+chicago&source=web&ots=09ILwb35zF&sig=3ZwXWvwL2bnBWJWc4hKV5sONCZQ&hl=en#PPA92,M1

I think I want to purchase the above book too...

SHAME SHAME SHAME on the city of Chicago.To hide thier actions of Partial removing those remains of Pioneers of the city without even leaving a Grave Marker of those Mother ,Father Sons and Daughters of the founders of this city.This is the same type of action taken at St.Johnathans Cemetery located at O'Hara Field. Doesn't Consecrated Land mean anything?I would like to see some Marker for those forgotten souls.