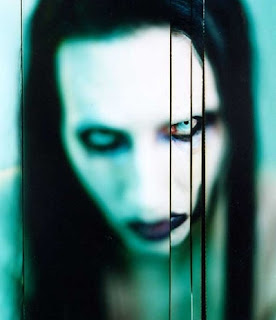 Musician and artist Marilyn Manson often talks and bases his music and artwork around the way people are fascinated with death, as well as fame (in relation). He comments on how people will use death to gain a certain immortality in the minds of others (fame). His stage name is a reference to Marilyn Monroe and Charles Manson, one a symbol of fame (and early death) the other of murder. He has further commented that people are willing to die and kill if they know enough people are watching, to gain this immortality or fame. This extends into a social comment on martyrism, television, and the hypocrisy people show between their fascination and thus promotion of death, and their decryment of violence.
Posted by SarahSeeb at 12:42 PM