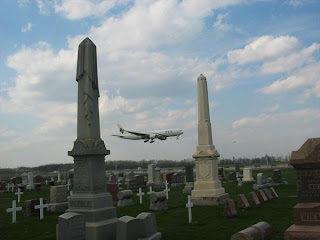 We just received a comment on Dina's blog entry about The Chicago City Cemetery. And in this entry D. R. Torri mentioned The St. Johannes Cemetery located in Ohare Field. I never knew of the cemetery in the field. I know that a retired Fireman one night trapped me in a Dunkin' Donuts and told me many stories about burning houses and tricks Firemen would play on each other, like hiding a dummy in a closet and telling people it was a dead body. This retired fireman also talked extensively about how the first Mayor Daley annexed all of the land for O'Hare, even though the land wasn't technically in the city of Chicago. He talked about how "connected" the Mayor and the Governor were at the time. So I learned a few things on that long night in the doughnut shop, and I would often tell this story halfheartedly to others. Halfheartedly because I never took the time to look up any of the facts. So here we are now, present day, and we receive this comment about the cemetery snuggled inside the grounds, and the turmoil and court cases between the city and the St. John Church. There is much about sacred ground, relocation and interment. I don't know if all of this has been solved, the last article I found was published by the city on May 8 2009. This battle intrigues me. Even though I fear cemeteries are overflowing and taking over the world, the idea of removing dead bodies from "sacred" ground and putting them somewhere else, in my more romantic mindset, is perfect fodder for Poltergeist type happenings to occur. The employees of the Control tower all turn around for a moment and when they turn back all the planes are in a corner of the runaway stacked on top of each other. Little girls get sucked into the monitors in the terminal hallways. Little boys have battles with the toys they have brought to the airport with them, think evil clown. 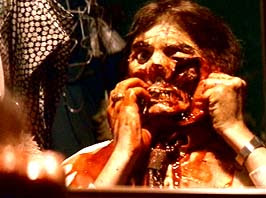 Men looking in mirrors in the VIP lounge accidentally shave off their faces. Little short women are at all the gates yelling, "Don't go into the plane!" Then they change their minds and start yelling, "Go into the plane!" Then finaly during a wicked storm, where there is no seconds to be counted between lightening and thunder, skeletons and half decayed bodies begin to emerge from the cracking runways.
This is where my mind goes when I think about sacred ground nestled inside an airport. Here are some links that tell perspectives of the actual story.

A blog about the situation

St. John's accusation against the city

Chicago informs the relatives of interment.
Posted by The Fool Machine Collective at 5:06 PM