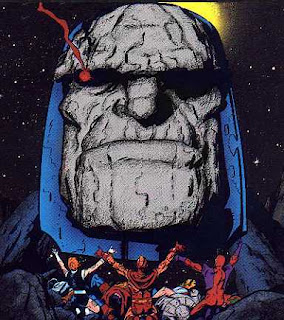 The Anti-Life Equation is the fictional equation for which the DC Comics villain Darkseid is searching in the Jack Kirby's Fourth World setting. It is for this reason that he sends his forces to Earth, as he believes part of the equation exists in the human subconscious. Various comics have defined the equation in different ways, but a common interpretation seems to be that the equation is a mathematical proof of the futility of living.
loneliness + alienation + fear + despair + self-worth ÷ mockery ÷ condemnation ÷ misunderstanding x guilt x shame x failure x judgment n=y where y=hope and n=folly, love=lies, life=death, self=dark side
Darkseid first became aware of the equation approximately 300 years ago when he made contact with the people of Mars. Upon learning of the Martian philosophy that free will could be defined by a "Life Equation", Darkseid postulated that there must exist a negative equivalent[1].
Jack Kirby's original comics established the Anti-Life Equation as giving the being who learns it power to dominate the will of all sentient and sapient races. It is called the Anti-Life Equation because "if someone possesses absolute control over you - you're not really alive."[2
By speaking said equation, Darkseid can insert the full formula into people's minds, giving them the mathematical certainty that life, hope and freedom are all pointless. According to Oracle, who barely escaped the "full" effects of the Equation by shutting down the entire Internet just in time, the Anti-Life Equation further states that the only point in anything is to conform to Darkseid's will[3].
the Anti-Life Equation is revealed as a living shadow-based deity that corrupts and destroys everything it touches.
Posted by SarahSeeb at 8:03 PM

It's funny you posted this, I was thinking about this when you kept bringing up equations the other day. I love the concept of evil math, but the whole Final Crisis comic event was a mess, I hate Grant Morrison.