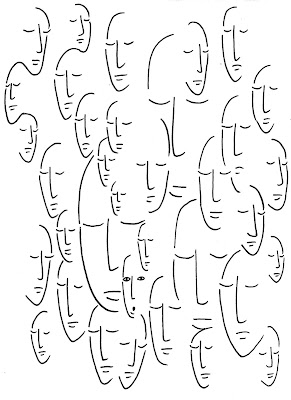 I remember when I was very young, five or six, I was troubled and could not sleep. I was overcome with a confusing sense of dread. My mother, hearing that I was up, came out bleary eyed wondering what I was doing out of bed. I remember telling her that I was afraid of life. My mother quickly told me that life is nothing to fear and it was death that I should be afraid of. I was then sent to bed. The thought of being afraid of life lingered while I laid in bed that night. I don’t know what I meant by it. I want to say that I sensed the burden of choices that were ahead of me. Choices that seemed so important. Choices that would shape who I am and what I would become. I felt paralyzed by those choices. My eyes grew weary but my mind raced as I stared at the ceiling. I was afraid. I had no idea how I would make any decisions for myself. I was afraid that I would grow up lame and would have to own my lameness. I wanted to hit a reset button but there is no reset button. I tried to turn my mind to other things. Towards friends, a funny joke, fart sounds. I’ll be stuck with my decisions and whatever I become. In the end, death will come and finalize all of my decisions. They won’t be able to be taken back. I’ll die with them. Outside a car drove by, it’s fleeting lights washed across an otherwise dim and still room.
Posted by pbsebastian at 11:49 PM

There are many things I like about this Peter. Not my favorite part, but a part that struck me as an exploration is the "restart button" More in concept, a restart button could be anywhere safe, like home, or even returning to a chair, of course it doesn't restart, but it may give one in fear the impression of removing themselves in order to regroup. I also like the implied motion of the person sitting in their room to unaware cars passing by outside. I saw this as a passive death, not that the person you follows dies in the end, but couched in all these entries about death the reader begins to expect some sort of death, and to give them something mundane is a great departure.

This kind of touches on something I was thinking of a lot when I tried to slow down my fearism and look at it a little more. I remember saying that it's not death itself that I fear, necessarily, but the pressure it puts on life and decisions.