Clif knows a third person who is afraid: 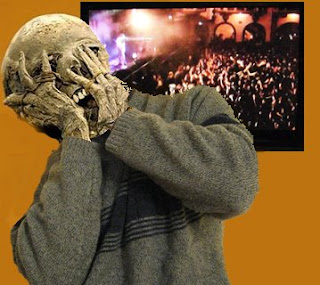 
It’s 1993 on the T.V. and he has wrapped himself up in 1994,
v-necked and allowing for deep breathing and openness and interconnectedness, but he recalls:

driving in 2001, listening to 96x; hearing the friend of a classmate on the radio telling him an asteroid has a date with the planet some night in 2017 and in

2009 he sits and starts to shake and thinks of
armageddon commercials,
reports of rising waters,
the pot-smoking engineer playing Dr. Mario and warning him that the poles are losing their ability to point a compass north and
he just shivers and
runs in circles, but not away from the global catastrophe that awaits.

Running in circles, not cutting through the floor, not stirring anything but the air in the sitting room, exerting control over nothing he fears, in the air or space, because the air and space are quite beyond his control, he quite involuntarily becomes nauseous and falls, quite lacking the self-control to prevent himself from vomiting on the hardwood, violently, eyes tearing,

on all fours, insensible, he thrashes about, searching for something upon which to steady himself, he finds the T.V. stand to be wheeled when he tries to lift himself up, it slides, the T.V.  falls,
he is defenseless,
unable to prevent flashing/singing 1993 from crashing down upon him in high definition.

There is a fire now.

1993 is broken and so is his shoulder.  He has also received quite a blow to the spine.  He cannot move, other than to quake and tremble with a • b + c - d=y (let a represent the thing you won’t tell anyone, b=smashing force, c=the dark, d=dignity, y=you), as he watches the flames lick up the walls, but he does not scream out because all of his energy has run up into his mind to consider this:

and unless you have been in a slightly prolonged death experience you cannot challenge the fact that he could, or would, have been thinking such things Mr. or Ms. Reality-Cop, which, you of all people should know, is impossible because you are dead and probably unable to read internet bloggings,

burning alive is probably no good, there is a shard of glass he could bleed himself out with, but he is clinging to every second,
not remembering the time before he was born, he worries
there will be no existence to follow, and
so he must savor the exquisite pain of what remains.

1994 is turning to ash around his body, v-neck not having much to do with breathing anymore and there is nothing to sweater because his skin will no longer let moisture pass through its blackening pores.

His thoughts are all that is left, but they seem to rattle around, trying to shake the idea that he will cease to be.

They solidify on an image of what is not even the color white nor the absence of light nor bright nor black.

The 90’s and all other decades become irrelevant as the neighbors dog runs out of the buildings front door.  He is cold because they cut off all of his hair and his head looks much larger than his body.