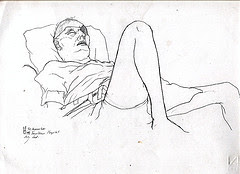 http://www.flickr.com/photos/samsa1973/sets/1144252/
I worked in a gallery in Providence, RI and I was looking for artists who had work to show...William Schaff invited me to his apartment to take a look at his stuff. At the time (2005?) his front room had a bunch of pleasant sketches of his dog up on the wall. But in the second room, the main living room, there were a lot of scratchboards of piles of dead bodies and politicians vomitting skeletons. When he saw how much we liked his work he took us into another room in which he had many sketches and scratchboards of holocaust victims. It's true that the images were...gruesome...? But there was something about them that made me feel like Wil wanted to look at death as directly as possible - in a way that was far more courageous than the rest of us. What I would most like to post here is a link to his Flickr account, in which you can see the sketches he did of his dying father. The scratchboard work seems appropriate for some of his other images of death - carving images out of the dark.
Posted by Vanessa at 9:39 AM

The cravings he did of his cancer-ridden father are particularly evocative. What an interesting way to explore your relationship with death.