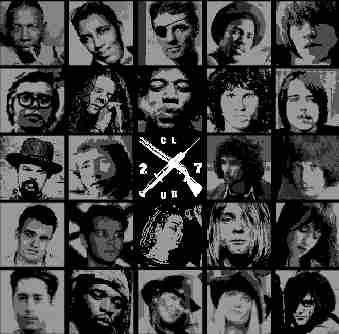 I am posting this on behalf of John Szymanski

There has been a large number of (predominantly rock) musicians over the years that have all died at the age of 27...which, in some circles has been dubbed "The 27 Club". There is even a Wikipedia article on this very subject, as with most other subject of great importance.

The first four musicians in this group all rose to fame in the 1960s, and have achieved quite a good level of, shall we say, immortality!

What is it about the age of 27 that causes or influences so many deaths of musicians? Of course, one could look at it as a major coincidence, and say "hey, there's plenty of musicians who died at any age!", but it's also tempting to thing there's some sort of karmic or other spiritual or devilish spirit at play here. Excuse me while I find my black light and fuzzy Hendrix poster...
Posted by pbsebastian at 8:20 AM

For what it's worth, some athletes (esp. baseball players) are considered to be hitting their prime starting at age 27. I wonder too about creative primes and whether or not that might contribute to people taking greater risks and encountering greater turmoil in their lives.

Interesting...the body regenerates itself approx. every seven years - every cell in the body. So every seven years, essentially, you have a brand-new body. Which explains things like shifts in skin texture, hair, allergies, metabolism, but maybe emotional shifts as well. 27 is at the end of the fourth cycle. I'll be turning 28 in two months - and in the past year I've noticed distinctive shifts - emotionally and physically. What do we all notice when we look back at the events in our personal and professional lives at the end of our last regenerative cycle?

There is also the concept of the Saturn Return - where individuals nearing the end of their 20's symbolically pass into adulthood or choose to not pass through this door to the next phase of their life - anyways its an interesting topic, thanks for posting -

A book is coming out this spring - www.the27s.com

I'll be joining the club

2 + 7 = 9. Number nine is the number of completion. Pthese artist accomplished all they were meant to in life.

A section, of this video, discusses young death, amon rock and rollers. Average lifespan is about 40 years less than the whol population. The segment begins at 16 minutes 12 seconds: The 27 Club! Although it is a truly informative, interestin, and helpful video, you may not be stron enough to face the reality behind their lives, if you watch it.

Thanks for the topic post. I have not seen the video posted above and seems a little slanted, but there is an online resource for The 27 Club which extrapolates further on the musicians and myth behind these artists.

What happens when the number of members hits 27? The end of the world? Or has it already hit 27, and you just don't know it yet?

Maybe someday there will be the invention of genetic regeneration procedures to solve the 7 year regeneration cycle problem. You know biotech. Even if the whole thing is a scam, I bet it'll still sell...

Well dying at the age of 27 facinates me a lot but i have already passed that age....ooooopps