And PT Barnum wanted her Leg 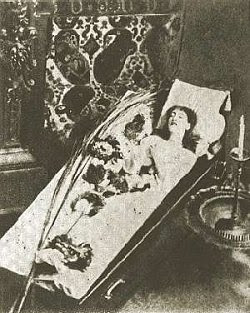 So I am reading a book about the Banquet Years in France. And like it was with Fools where everywhere I look I saw crates, now everywhere I look I see DEATH. That is no surprise, because death IS everywhere, sometimes we just don't want to look too closely. Anyway, this picture is of Sara Bernhardt. Is this a photo of her dead in a coffin, does it belong in the Mourning Museum? No. She is alive! Sarah was given a coffin by a fan while she was in France. Supposedly he said he would buy her anything and she asked for a coffin, and he gave her one. She was said to carry that coffin with her on tours. She wouldn't normally sleep in it, but it sat at the end of her bed until her real death. What I don't know is if she was actually buried in this coffin. I must investigate.
Posted by The Fool Machine Collective at 7:12 PM

I wonder if this was the precursor to the superfans that bought the Kiss Koffin (R)!

I know what you mean! I am always on the look out now, eyes and ears, for death.