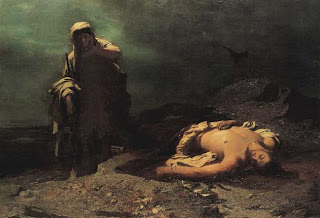 My first quarter of graduate school I chose Antigone
http://en.wikipedia.org/wiki/Antigone as the primary source for my final paper in Intro to Graduate Study. The result is an essay about how Antigone's love for her brother Polyneices drives her to bury him in the ground, thus breaking Kreon's law and ensuring her own death. I argue that it is love and a kinswoman's duty to ensure respectful burial, not a just feminist mentality, that drives Antigone to commit her crime. My research involved burial practices in ancient Greece
http://people.uncw.edu/deagona/ancientnovel/kristina.htm, the origin of Thebes, the myth of Seven Against Thebes
http://en.wikipedia.org/wiki/Seven_Against_Thebes (also known as the Theban Dead, and also immortalized in a play by Aeschylus). Also Antigone was, by the way, the first play of the Oedipus Cycle penned by Sophocles.

This is from a source article titled, "Sophocles' Antigone and the Funeral Oratory:"

"To create a democratic, this is, public funeral, the demos [a rhetorical term for the population of an ancient Greek state] appropriated rites of aristocratic funerals which its legislation had been continually restricting since Solon. The demos displayed the bones for two days...under a tent in the agora [a place of assembly in ancient Greece]. Here, families mourned their husbands, sona and brothers with whatever customs they wished. The concession to familial loss and grief, loosened from normal curbs on public display, contrasts the first two days with the rituals of the third. On the dawning of this day, no longer are the bones distinguished by the names, identities, and economic and social differences that separated individuals
in life. Now they are 'the dead'...while laws denied the family's right to bring outsiders, slaves, strangers, and paid mourners into its funerals, anyone could join in the public ceremony. Setting forth from the agora, the procession moved solemnly toward the [public ceremony]. It was perhaps escorted by hoplites [infantrymen] in full armor; the high-pitched keening of the women fills the air, soon to be superseded by the orator's sonorous words. When the dead arrive at the public cemetery, the mourners seek renewal through an oration that replaces not only the familial rites of fertility and purification but also the praise and laments sung for
individual heroes by poets."

And interestingly, the role of women in burial rites:

"During the archaic period, women exercised influence upon social and political life through their prominence in burial rites. Beginning in the sixth century, legislation was passed that sought to curb their participation and tone down the extravagance of their lamentations and displays of grief. Private funerals, formerly conducted outside and through the streets, were confined to the household. Lament by women in public was prohibited."

Further: "women were the proper agents of burial...in a traditional funeral women performed fertility rites to assure the dead a quiet rest and to purify the land for the living. Bewailing the dead, women beat their breasts, lacerated their cheeks, and called upon the dead."

Women played a major role in ancient Grecian burial, but so did the state. This was the role death played in society during Sophocles' time, and so he wrote a play the people could identify with. The people of Thebes in his play are strictly forbidden from burying Polyneices because he is considered a traitor. The proper punishment for a dead traitor is also a horrific punishment in terms of displeasing the gods and barring a soul from moving into the underworld. Burial was vital, and Polyneices was left exposed to decay and be feasted upon by animals. "The ancient Greeks had distinct methods of burial, and it was often believed if you were not provided a
proper burial along with the appropriate rituals, you were destined to suffer between worlds until your rites of passage into the underworld were completed." This is from Kristina Bagwell's website on burial rituals and the afterlife in ancient Greece, linked above. Antigone is not just a woman who defies the leader of the state, who happens to be a man. She is a sister ensuring the rightful passage of her departed brother, as is her duty to do. As she argues in the play, the will of the gods be done, not obedience to a law instituted by just one man.

"No suffering will be so terrible/as to die for nothing." --Antigone

"If you must love somebody/go down there and love the dead." --Kreon

Originally Posted by DINA
Posted by The Fool Machine Collective at 2:10 PM

I find it odd that Antigone bears much love for Polyneices who along with his brother Eteocles was cursed by their father, Oedipus. She was a supremely loyal daughter to her father, so for her to honor her brother, especially in the likelihood of her being condemned to death (& thus missing her approaching marriage to Haemon), is deeply puzzling to me.

I'm interested in reading the full text of the article you cited--where did you find it?