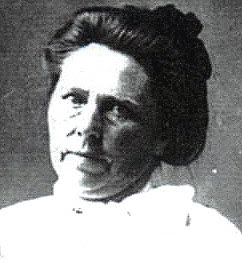 Yesterday there was a really fascinating article on the front page of the Chicago Tribune about Belle Gunness, also known as "Lady Bluebeard," a serial killer who lived on a farm near La Porte, Indiana in the first years of the twentieth century. The article focuses on a student forensic anthropologist's attempt to uncover whether the body currently buried in Belle Gunness's grave is, in fact, Belle Gunness. This is another side to How the Dead Speak; only this time, the subject is a serial killer.

Gunness was a wealthy Norwegian widow who lured suitors to her quiet farm via charming and explicit love letters, promising marriage. When a suitor arrived at her home, she fed them a hefty old-fashioned Norwegian meal laced with strychnine, waited for them to die, then took them to the cellar where she would then dismember the body and bury the remains in the hog pen.

The world came to know Belle Gunness when her farm burned to the ground in 1908, allegedly killing her and her three children. Her body, however, when discovered, was headless. A relative of one of Belle's many doomed suitors was the one who insisted that authorities search the property for bodies. They did, and they found more than just one body: 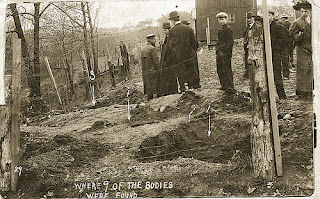 They found 11. It is estimated that Belle Gunness killed as many as thirty people during her lifetime. From the article:

Gunness' first husband and two of their children had previously died unexpectedly after suffering from symptoms of poisoning. She collected life insurance on all three. A week after Gunness remarried, her new husband's baby from a previous union was dead, Simmons said. Several months later, her husband died when a sausage grinder allegedly fell on his head. Again, she collected life insurance.

She became a legend, labeled by the nickname "Lady Bluebeard." Rumors swirled for years after the fire that Belle's "body" was someone else's, and she had faked her death. That is what this forensic anthropologist is trying to find out. I can't wait to find out too. Did she fake her death, or did she die? The alleged body of Belle Gunness has been exhumed, and its headless remains are being examined, and DNA pulled to compare to DNA in the saliva Belle left behind on one of her love letters to a victim. He had opened the envelope with a letter opener, thus the preserved DNA.

Above all, it amazes me that I never heard of this story before--that a serial killer was discovered not very far away in La Porte, Indiana (which I have visited), only twenty five or so years after Dr. H. H. Holmes confessed to murdering 27 people, although he may have murdered many more. H.H. Holmes is the subject of Erik Larson's book Devil in the White City. When I think of Holmes and Gunness, I think of how killing must have brought them some form of joy; a pleasure that ordinary life cannot bring, but rather bringing the end of life. Perhaps it brought them peace, as if fulfilling some void that other humans possess naturally. Or maybe it was just power.
Posted by Dinabear at 12:56 PM

I think this is the case that spawned. Arsenic And Old Lace. I'm not positive but I think it has some influence.

After your comment I had to find out; it turns out Arsenic and Old Lace is inspired by Amy Archer-Gilligan, a serial killer from Windsor, Connecticut. She is known to have killed at least five people by poisoning them with arsenic. Here's the link to the Wikipedia article:

As far as HH Holmes and the Devil and the White City book - I was intrigued at how much killing was a part of his everyday life. His purpose-built 'castle' on 63rd and Wallace was just the tip of the iceberg...it was just 'what he did', along with bigamy, fraud, etc etc.

As far as other serial killers, I grew up about 8 blocks from where John Wayne Gacy lived...

It would be interesting to see what stands on these places now - I believe there's a post office where Holmes' castle was...Gacy's house has been replaced with a new house that is vacant every couple of years...etc etc!