How the Dead Speak

On Monday I read an article in the Chicago Tribune about the successful identification of the previously unknown body of a teenage girl who was found dead in a large appliance box a little over a year ago. Her badly beaten, decomposed body made it difficult, if not impossible, to uncover her identity. They couldn't even get a good impression of prints from her fingertips. As we all know, though, the dead have the power to speak, and their stories can be heard through forensic science. "Lucy," a primitive human estimated to have lived 3.2 million years ago, is just one case, and an extreme one at that; she is more the product of anthropology than forensic science, but her age and presence give her a voice nonetheless. Marlaina "Niki" Reed, the teenager from the appliance box, was identified through her dental records and facial reconstruction. The link to the Tribune article unfortunately does not show the photo of Reed compared to the photo of the facial reconstruction built from her skull, but trust me, it was eerie how accurate the forensic scientists were in their work.

Forensic facial reconstruction was probably most famously (and controversially) used in the case of King Tutankhamun: 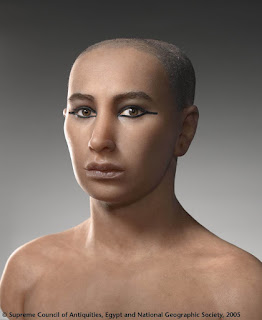 "In 2005, three teams of scientists (Egyptian, French, and American), in partnership with the National Geographic Society, developed a new facial likeness of Tutankhamun. The Egyptian team worked from 1,700 three-dimensional CT scans of the pharaoh's skull. The French and American teams worked plastic moulds created from these—but the Americans were never told who the subject of the reconstruction was. All three teams created silicone busts of their interpretation of what the young monarch looked like...Although modern technology can reconstruct Tutankhamun's facial structure with a high degree of accuracy based on CT data from his mummy, correctly determining his skin tone is impossible. The problem is not a lack of skill on the part of Ancient Egyptians. Egyptian artisans distinguished quite accurately among different ethnicities...[although] Sometimes they depicted their subjects in totally unreal colors, the purposes for which aren't completely understood. The colours may have had ritual significance. There is no consensus on King Tut's skin tone. Terry Garcia, National Geographic' s executive vice president for mission programs, said, in response to some protesters of the King Tut reconstruction—'The big variable is skin tone. North Africans, we know today, had a range of skin tones, from light to dark. In this case, we selected a medium skin tone, and we say, quite up front, 'This is midrange.' We will never know for sure what his exact skin tone was or the colour of his eyes with 100% certainty. ... Maybe in the future, people will come to a different conclusion.'"

Also, is has been determined by some scientists that King Tut was murdered: "X-rays of this mummy, which were taken previously, in 1968, had revealed a dense spot at the lower back of the skull. This had been interpreted as a subdural hematoma, which would have been caused by a blow. Such an injury could have been the result of an accident, but it also had been suggested that the young pharaoh was murdered. A trauma specialist from Long Island University insisted that this injury could not have been from a natural cause. The specialist stated that the blow was to a protected area at the back of the head which is not easily injured in an accident. This means someone would have had to sneak up from behind. If this were the case, there are a number of theories as to who is responsible. One popular candidate is his immediate successor Ay and other candidates includes his wife and chariot-driver. Interestingly, there seem to be signs of calcification within the supposed injury, which if true, meant Tutankhamun lived for a fairly extensive period of time (on the order of several months) after the injury was inflicted."

Marlaina "Niki" Reed died from a combination of strangulation and the severe beating she endured. Now she an King Tut have something in common. But whereas her skull was used to reveal her identity, King Tut's was reconstructed out of sheer curiosity.

Forensic science is at the forefront these days; anyone who watches CSI, CSI Miami, CSI New York, Bones, NCIS, etc. etc. knows that. I found this bit of interesting trivia in Wikipedia as well: