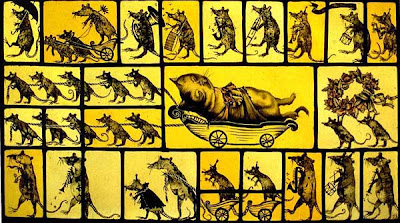 In America, the Jazz Funeral is unique to New Orleans. However, it has its roots in North Africa. A Jazz Funeral is a funeral march involving family friends and a brass band from the funeral service to the place of burial and then back out onto the streets. The music played on the way to burial is somber. Usually dirges and spiritual hymns, such as 'Nearer my God to Thee' or 'In the Sweet Bye and Bye', are played on the way to the cemetery. Once the body is "cut loose" (buried or driven away by the hearse after close ones have said their good-byes) the tenor of the music changes and the band marches on playing more upbeat music such as 'When the Saints Go Marching In' or 'Didn't He Ramble'. At this point marchers would often dance. Onlookers are encouraged to join the march and are called the second line. Brightly colored beads and feathers are often provided to the second liners. It is a social faux for a second liner to make his way ahead of a first liner.
Posted by pbsebastian at 1:23 PM

I almost included a sound bit and a version of a new orleans funeral dirge by Jelly Roll Martin in Fools. But it didnt work, perhaps this is the show for it!

Jazz funerals are amazing. I don't think there is another ritual in this country that is such a product of its place.