Death vs. Love (or chips of when) 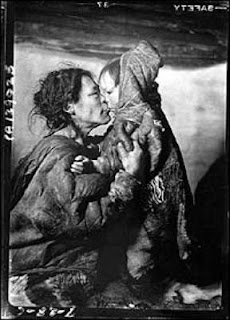 PHOTO BY RICHARD HARRINGTON
A Picture and a Thousand Words

John Goddard on `Canada's Madonna and child' - TorStar Feb. 27, 2005. Death and love have rarely been portrayed together so dramatically. Mother and child are on the brink of starvation. The previous fall,the main caribou herds bypassed their camp and now, toward the end of February 1950, nothing remains in the igloo to ingest except scraps of caribou skin. Earlier pictures from the same roll show the mother displaying the scraps to her three-year-old son and encouraging him to chew on one. Then, with nothing else to give, she floods the boy's senses with love. She grips him firmly and close, presses nose-to-nose as though to literally breathe life into him, and showers him with comfort and affection - through her eyes, her smell and the familiar rustle of her clothes.
And a little e.e. cummings for juxtaposition:
death (having lost) put on his universe
and yawned: it looks like rain
(they've played for timelessness
with chips of when)
that's yours; i guess
you'll have to loan me pain
to take the hearse,
see you again.
Love (having found) wound up such pretty toys
as themselves could not know:
the earth tinily whirls;
while daisies grow
(and boys and girls
have whispered thus and so)
and girls with boys
to bed will go,
Posted by Tanya at 12:47 PM

Hey Tanya, I am fascinated by this subject of love and death. I have been reading a bit about sex and death, so it would be interesting for someone to search out passages about LOVE and DEATH

I'll keep my eyes peeled. Speaking of, did you know that undertakers put little spiked caps underneath the eyelids to prevent them from opening?