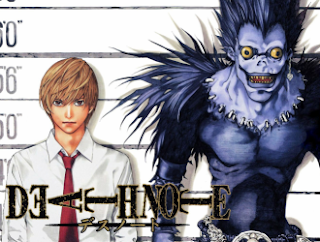 So this is something I wanted to share with you death-obsessed foolish
machine collectibles. I don't believe I can post it to your blog, or if I
can, I'm unsure how, so I'm just emailing it to you.

In 2003, Tsugumi Ohba and Takeshi Obata created *Death Note, *a serial manga centered around a "Death Note"--a mystical notebook of the Japanese shinigami (death gods). The notebook functions, basically, as follows: whoever's name is written in the Death Note dies in a few minutes after the name is written. If no cause of death is specified, the victim dies of a sudden heart attack. (There are a host of other rules that the characters discover throughout the series, but those are the basics.)

The notebook is dropped into our world by the death god who owns it for no other reason than curiosity. It is picked up by an extremely gifted high school student, Light Yagami, who is equally bored and curious. He begins using the Note, at first, to dispatch notorious criminals, and views himself as a sort of omnipotent superhero, making the world a better place. The shinigami, who tags along as a sort of familiar spirit, is greatly amused.

Naturally, however, the number of sudden unexplained deaths begins to raise questions in the law enforcement organizations of the world, and soon they fear they are dealing with an extremely dangerous serial killer.

This leads Light to begin dispatching people who seek to stop him, as well as random people who might throw the police off of his trail. And from that point on, we watch Light slide down the slippery slope that comes with the power of life and death.

Things complicate even further when the police call in a mysterious detective known only as "L," who is Light's equal in intellect and cunning, and whose deliberate anonymity keeps him safe from the Note itself. And the story becomes a very deadly cat-and-mouse game, wherein the detectives try to catch a killer who they've never seen and who can kill them without touching them, and wherein Light attempts to ascertain the identity of his nemesis specifically for the purposes of killing him.

The series explores, in incredible depth, the morality of murder and the ability of omnipotence to corrupt. Yagami slips so casually into wanton evil that even he fails to notice it, and if he ever seems aware of how far he's fallen from his originally stated purposes, he no longer cares. As it is, he's having too much fun playing his deadly chess to consider the ramifications of his activities.

The trailer for the first film they made is here:
http://youtube.com/watch?v=apaWHzttRJ8

Bilal Dardai
Posted by The Fool Machine Collective at 4:05 AM

This is oddly similar to the HBO show Dexter. He is a serial killer who kills serial killers and he gets obsessed with a serial killer that is hunting him. It also deals with the moral issue of killing killers. And of course he is an anti-hero. I would NOT call the main character in No Country For Old Men a hero. I think he is just the starring villain, who gets away, and he's likable probably because he has an ethic, fucked up yet he has an ethic and he lives it.

I like the idea of the book that brings death with the writing of a name within it. The relationship between death and the writing (or erasing) of a person's name has shown up before.

In an earlier discussion of death personified we discovered that Islam has a servant of God named Azrael who is constantly writing names in a book with a person's birth and erasing them at that person's death.

Doesn't Saint Peter also have a book with names in it?

I wonder where else this relationship between death and the printed name shows up? I also wonder why it shows up. Perhaps the writing of one's name is extremely particular for that person. For example, I am the only ‘Peter Benson Sebastian’ that I am aware of. And regardless of the possible existence of other ‘Peter Benson Sebastians’ that name is incredibly personal to me. When I see my name in print not only do I know that I am the referent, but that combination of letters on the page is, in a way, a piece of me. It is myself personified in word-form. Therefore, the erasure of my name is death to my letter-based personification (but fortunately not to my carbon-based personification (unless I live in Death Note (but even then it would only be death to my Manga-based personification)))

I think death and the photograph has this same feel to it, whatever that feel might be (see connor's early posting)

I love that you two have latched on to the words and photograph idea, I think perhaps at our meetings this can be discussed at length.