The Sound of Death

The link is to a npr show called RadioLab, they create one hour documentaries about science and many different topics.

The topic for this one is The Sound of Death.

Blurb:
Imagine that you're a composer. Imagine getting this commission: “Please write us a song that will allow family members to face the death of a loved one…” Well, composer David Lang had to do just that when a hospital in Garches, France, asked him to write music for their morgue, or "Salle Des Departs."
Listen:

Wanted to post a picture with the RadioLab link and searched for Death Ear and found this article: 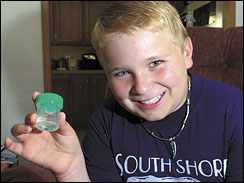 (AP) These guys were not exactly Snap, Crackle and Pop.

What began as a faint popping in a 9-year-old boy's ear — "like Rice Krispies" — ended up as an earache, and the doctor's diagnosis was that a pair of spiders made a home in the ear.

"They were walking on my eardrums," Jesse Courtney said.

One of the spiders was still alive after the doctor flushed the fourth-grader's left ear canal. His mother, Diane Courtney, said her son insisted he kept hearing a faint popping in his ear — "like Rice Krispies."

Dr. David Irvine said it looked like the boy had something in his ear when he examined him.

When he irrigated the ear, the first spider came out, dead. The other spider took a second dousing before it emerged, still alive. Both were about the size of a pencil eraser.

I am totally and completely addicted to Radiolab. It is one of the coolest things ever made. Jad and Robert could talk about anything and make it really interesting. I downloaded and listened to every episode as podcasts!

glad to hear that other people enjoy it.