St. Joan of Arc (for Jessica) 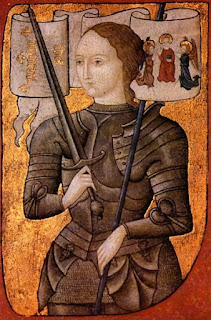 Over the Christmas holiday I ran across a book that now I wish I had held onto...it told of how famous figures in world history died, including St. Joan of Arc. The description of her death, which is conveniently glazed over in the Catholic Encyclopedia, included her request that a crucifix be held in her direct line of vision as she was burned at the stake and that after her clothes were burned away from her body, the fire of was stopped so all could view her naked, charred body before being started again. According to Wikipedia, she was already dead by the time this happened, and the fire was stopped so all could see that she did not escape the flames, not so they could just see her naked body. Who knows which is true. Below is text I pulled directly from St. Joan's Trial of Condemnation, in which she is declared a heretic, excommunicated from the Catholic Church, and is sentenced to death. It is lengthy, and it's just a glimpse really. But the language is harsh and petulant. They really wanted this poor girl to suffer.

"...At all times when the poisoned virus of heresy attaches itself with persistence to a member of the Church and transforms him into a member of Satan, extreme care should be taken to watch that the horrible contagion of this pernicious leprosy do not gain other parts of the mystic Body of Christ. The decisions of the holy Fathers have willed that hardened heretics should be separated from the midst of the Just, so that to the great peril of others this homicidal viper should not be warmed in the bosom of pious Mother Church. It is for this that We, Pierre, by the Divine Mercy, Bishop of Beauvais, and We, Brother Jean Lemaitre, Deputy of the renowned Doctor, Jean Graverend, Inquisitor of the Evil of Heresy, specially delegated by him for this Process, both Judges competent in this Trial, already, by a just judgment, have declared this woman fallen into divers errors and divers crimes of schism, idolatry, invocation of demons and many others. But because the Church closes not her bosom to the child who returns to her, we did think that, with a pure spirit and a faith unfeigned, you has put far from thee thy errors and thy crimes, considering that on a certain day you did renounce them and did publicly swear, vow, and promise never to return to thy errors and heresies, to resist all temptations, and to remain faithfully attached to the unity of the Catholic Church and the communion of the Roman Pontiff, as is proved at greater length in a writing signed by your own hand. But after this abjuration of your errors, the Author of Schism and Heresy had arisen in your heart, which he had once more seduced, and it had become manifest by thy spontaneous confessions and assertions - O, shame! -that, as the dog returns again to his vomit, so have you returned to your errors and crimes; and it had been proved to us in a most certain manner that you have renounced thy guilty inventions and thy errors only in a lying manner, not in a sincere and faithful spirit. For these causes, declaring thee fallen again into your old errors, and under the sentence of excommunication which you have formerly incurred, WE DECREE THAT YOU ART A RELAPSED HERETIC, by our present sentence which, seated in tribunal, we utter and pronounce in this writing; we denounce thee as a rotten member, and that you may not vitiate others, as cast out from the unity of the Church, separate from her Body, abandoned to the secular power as, indeed, by these presents, we do cast thee off, separate and abandon thee; - praying this same secular power, so far as concerns death and the mutilation of the limbs, to moderate its judgment towards thee, and, if true signs of penitence should appear in thee, [to permit] that the Sacrament of Penance be administered to thee.

Here follows the Sentence of Excommunication...that you have been on the subject of thy pretended divine revelations and apparitions lying, seducing, pernicious, presumptuous, lightly believing, rash, superstitious, a divineress and blasphemer towards God and the Saints, a despiser of God Himself in His Sacraments; a prevaricator of the Divine Law, of sacred doctrine and of ecclesiastical sanctions; seditious, cruel, apostate, schismatic, erring on many points of our Faith, and by all these means rashly guilty towards God and Holy Church. And also, because that often, very often, not only by Us on Our part but by Doctors and Masters learned and expert, full of zeal for the salvation of thy soul, you have been duly and sufficiently warned to amend, to correct thyself and to submit to the disposal, decision, and correction of Holy Mother Church, which you have not willed, and have always obstinately refused to do, having even expressly and many times refused to submit thyself to our Lord the Pope and to the General Council; for these causes, as hardened and obstinate in thy crimes, excesses and errors, WE DECLARE THEE OF RIGHT EXCOMMUNICATE AND HERETIC; and after your errors have been destroyed in a public preaching, We declare that you must be abandoned and that We do abandon thee to the secular authority, as a member of Satan, separate from the Church, infected with the leprosy of heresy, in order that you may not corrupt also the other members of Christ; praying this same power, that, as concerns death and the mutilation of the limbs, it may be pleased to moderate its judgment; and if true signs of penitence should appear in thee, that the Sacrament of Penance may be administered to thee."

In the end, she was foiled by clothing; wearing men's clothing was considered heresy, and she was burned at the stake for breaking a biblical law.

"And because Jeanne was dressed in the dress of a man - that is to say, a short mantle, a hood, a doublet and other effects used by men-although, by our orders, she had, several days before, consented to give up these garments, we asked her when and for what reason she had resumed this dress.(1)....(Several versions of the reasons which caused Jeanne to resume the forbidden dress were given in the evidence taken at the Rehabilitation, all purporting to have come from her. According to Massieu, her woman's dress was taken away while she was asleep, and the English soldiers refused to give it back to her, offering in its stead the man's dress she had previously worn, 'which they emptied from a sack.' She refused to wear it, reminding them that it was forbidden her; but at last, at midday, finding them deaf to her remonstrance, she was obliged to rise and attire herself in the prohibited garments. The Dominican Brothers declared that she had been assaulted by an English milord, as she told them, and that she therefore considered it necessary to return to the protection of her old dress; but considering the type of soldier in whose care she was placed, there seems no need to seek for any further explanation than her own, as given in the text, and as later corroborated by Manchon and De Courcelles. In the Rehabilitation Inquire, both Jean de Metz and de Poulengey claim to have suggested the male attire. At Poitiers, Jeanne herself stated that she had adopted it as most suitable to her work and the company she must share.)

"I have but now resumed the dress of a man and put off the woman's dress."

"I took it of my own free will, and with no constraint: I prefer a man's dress to a woman's dress."

"You promised and swore not to resume a man's dress."

"I never meant to swear that I would not resume it."

"Why have you resumed it?"

"Because it is more lawful and suitable for me to resume it and to wear man's dress, being with men, than to have a woman's dress. I have resumed it because the promise made to me has not been kept; that is to say, that I should go to Mass and should receive my Savior and that I should be taken out of irons."

"Did you not abjure and promise not to resume this dress?"

"I would rather die than be in irons! but if I am allowed to go to Mass, and am taken out of irons and put into a gracious prison, and [may have a woman for companion(2)]....(This request is found only in the Minute.) I will be good, and do as the Church wills."

In looking up the correct spelling of Dreyer's name I discovered that the entire film is posted on youtube. I hope you have a fast connection. But if not, and even if you do, I would suggest watching it on DVD. That way you can see it with translations of the intertitles and without all of the overt digital compression.

I just read that the Christians had put an end to the widely used cremation process back in 200 ad. The only times the church used cremation was in burnings like with Joan of Arc, because they believed this destroyed the soul. Which is unlike the Greeks using it 100 of years earlier for their soldiers. In their belief the burning of the warriors body helped the soul to escape the imprisonment of the body.

You can find the trial records, the movie The Passion of Joan of Arc and just about anything else you want to know about Joan of Arc at MaidofHeaven.com