Eliza's post about the treatment of death (or rather, murder) in recent films reminded me of one of my favorite screen deaths.

Joe Gillis is the burnt-out screenwriter, narrator and, eventually, murder victim from Billy Wilder's Sunset Boulevard. In a clever bit of noirish subversion, we come to realize that Gillis (William Holden) is narrating posthumously. The first two pictures are accompanied by text from the movie's opening voiceover. The last picture is accompanied by his final bit of narration.

No big ideas here, just one of my favorite plot devices. The pulp writer Jim Thompson has also written a handful of novels with posthumous narration, which his biographer, Robert Polito, called 'acts of self-eulogy'. 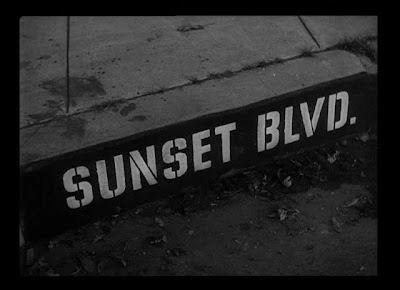 Yes, this is Sunset Boulevard, Los Angeles, California. It's about five o'clock in the morning. That's the Homicide Squad - complete with detectives and newspapermen. A murder has been reported from one of those great big houses in the ten thousand block. You'll read about it in the late editions, I'm sure. You'll get it over your radio and see it on television because an old-time star is involved - one of the biggest. But before you hear it all distorted and blown out of proportion, before those Hollywood columnists get their hands on it, maybe you'd like to hear the facts, the whole truth. If so, you've come to the right party. 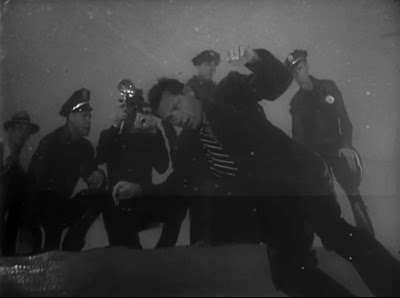 You see, the body of a young man was found floating in the pool of her mansion - with two shots in his back and one in his stomach. Nobody important, really. Just a movie writer with a couple of 'B' pictures to his credit. The poor dope! He always wanted a pool. Well, in the end, he got himself a pool - only the price turned out to be a little high.

Well, this is where you came in. Back at that pool again, the one I always wanted. It's dawn now, and they must have photographed me a thousand times. Then they got a couple of pruning hooks from the garden and fished me out, ever so gently. Funny how gentle people get with you once you're dead. They beached me like a harpooned baby whale and started to check the damage, just for the record.
Posted by Connor at 6:05 PM