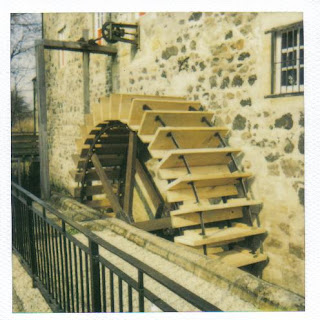 I always feel bad when I'm in Contraption rehearsal, and Bilal walks in on a conversation between Dina and I about cemeteries, or when I'm on my ten-minute break and that break turns into an eleven, because John Pierson's in the kitchen and we need to discuss ways an audience members perception can be fucked with you force him into a coffin for the duration of a show.

So this post is dedicated to Bilal, to show him that I am thoroughly capable of balancing more than two books on my head than once, and that there's nothing to worry about.

Behold! Worlds come together in this excerpt from John Kelly's The Great Mortality, a history of the Black Death. Kelly describes the technological advances in agriculture that helped surge the populaton of 750-800 AD, which in turn set the stage for the upcoming plague. Plague's thrive when there are a lot people around:

"Someone figured out that one easy (and cheap) way to get a horse to pull more was to redistribute weight away from its windpipe, so when it moved forward it wouldn't choke. Thus was born the horse collar, which increased horsepower by four. Another simple innovation, the horseshoe, increased it even more, by improving the horse's endurance....The true technological marvels of the age were the watermill and the windmill; for the first time in history, a society had harnessed a natural source of power. 'Behold,' wrote an admiring monk, 'the river throws itself first impeuously into the mill to grind the wheat separating the flour from the bran. Then it fills the cauldron to prepare drinks for the monks. Yet, the river does not consider itself discharged. Merciful God! What consolations you grant to your poor servants.' "
Kurt Chiang, Multi-Tasker.
(p.s., I'm off-book, Bilal. I swear.)
Posted by Kurt Chiang at 4:20 PM