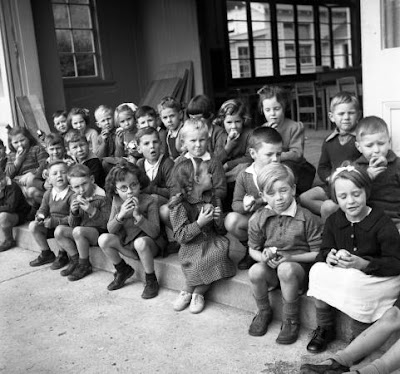 Excerpt from a favorite short short story of mine -- Donald Barthelme's "The School." This is a conversation between a teacher and his students...

One day, we had a discussion in class. They asked me, where did they go? The trees, the salamander, the tropical fish, Edgar, the poppas and mommas, Matthew and Tony, where did they go? And I said, I don't know, I don't know. And they said, who knows? and I said, nobody knows. And they said, is death that which gives meaning to life? And I said, no, life is that which gives meaning to life. Then they said, but isn't death, considered as a fundamental datum, the means by which the taken-for-granted mundanity of the everyday may be transcended in the direction of--
I said, yes, maybe.

The entire story can be read here. In addition, that website has a lot of death-related information and resources. It is the website for an old All Things Considered episode on NPR. The main page for that is this link. I particularly like the transcript from the Mary Tyler Moore show, a sketch called "Chuckles Bites the Dust."
Also, a pretty cool picture of school children eating apples. In New Zealand. Because there always needs to be a picture. I think it's a good picture.
Posted by Kurt Chiang at 5:04 PM

I read this story! lol How come children have this sense of life. So advanced questions...only postmodernism to make an such absurd..