Steve Martin on Fear and Laughs 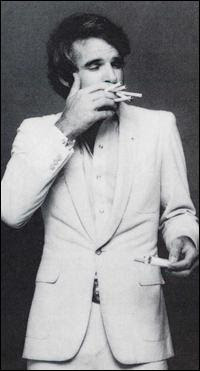 I'm reading Steve Martin's new book, Born Standing Up. Dina was kind enough to let me borrow it, with the dust jacket and everything. In this passage, he's not speaking of death so much as he is speaking of fear. But it's clear how the two go hand in hand. Hmm...maybe we should do a death segment for a show based around fear (chin scratch).

As a teenager Steve Martin blacked out unexpectedly, and was diagnosed with a heart murmur. The doctor said he would outgrow it, but this episode made him a certified hypochondriac.

He's in his early twenties here, and he just sat through The Producers with his heart racing and saliva dripping down his shirt, not knowing what was wrong with him...

My friends walked me along Sunset [Blvd.] again, and I remember humming, "Whenever I feel afraid, I hold my head erect and whistle a happy tune" from The King and I. I spent the night...in absolute terror. I kept wondering, "Am I dying?" but was more concerned with the question "Do I have to quit my job?"

He wakes up fine, but when he explains what happened to a friend, the symptoms come back in full force.

The cycle was unbreakable. Any relief was followed by the worry of recurrence, which itself provoked the symptoms. After a few weeks, a list of triggers developed. I couldn't go back to a movie theater, and didn't for at least ten years. I never smoked pot again [oh, yeah, he was also high that night]....However, the worst trigger was a certain event that, cruelly, happened every day. It was night. Eventually, I could find my way through the daytime, but as I left work, winding my way up the canyon streets as the sun set, I imagined feeling the slight rise in elevation and the air getting thinner. Nuts, I know. As a teenager, I had mixed a somber home life with a jubilant life away from the house. Now I could be funny, alert, and involved while nursing internal chaos, believing that death was inching nearer with each eroding episode of terror.

He's also got this great paragraph about his "comic direction," a direction he started to take very early in his career. I like to think it has some relevancy to what Fool Machine does:

What if there were no punch lines? What if there were no indicators? What if I created tension and never released it? What if I headed for a climax, but all I delivered was an anticlimax? What would the audience do with all that tension? Theoretically, it would have to come out sometime. But if I kept denying them the formality of a punch line, the audience would eventually pick their own place to laugh, essentially out of desperation. This type of laugh seemed stronger to me, as they would be laughing at something they chose, rather than being told exactly when to laugh.

Of course, he then goes on to say that this was his theory at the time, meaning in the 70's, and that he continued to "roll it up a hill like Sisyphus" for the next eight years. Probably not a good thing. I'm expecting him to eventually say he buried this theory and never looked back. But it's still exciting, something to tinker with, something to try to put on its feet.
Posted by Kurt Chiang at 5:07 AM

I really like what Steve Martin has to say about comedic tension. About denying the audience a punch line and by doing so forcing them to laugh at what they choose (the desperation, perhaps the absurdity of the performance or something they read into, or the comedian himself). Not producing a punch line, or even more so an anticlimax, is counter intuitive for a comedian. For someone, who expected to produce laughter, to walk up on stage and not allow himself to break the tension (and thus create laughter) has a good deal of integrity.

I plan on reading that book

I also love that passion about tension....Okay I actually meant to write, that "passage" about tension, but I guess either is appropriate. It describes my favorite kind of humor perfectly. In fact I once dated a circus clown and we had a whole argument about this.

And what, my friends, is a greater release of tension, then death?

Um, also, Jay Mohr (comedian) wrote an autobiography that I didn't read but am quoting second-hand, in which he also suffered from anxiety. And his doctor told him that such high levels of anxiety, panic attacks, depression and such were statistically most common among medical students and actors in their twenties. hm.

I was born with a heart murmur. (and believe if or not, Shingles)The doctors said it might go away as I got older. It never has. Every time I go in for a check-up or whatever, the doctor puts the stethoscope to my chest, has me breathe in, and then after awhile the doctor will pull back, pace the room and ask quietly "Do you know you have a heart murmur?" I do know this but I have come to enjoy the doctor's uncomfortableness with having to ask if I know. So my heart murmur has also caused laughter for me, and yes, a whole lot of tension and anxiety.