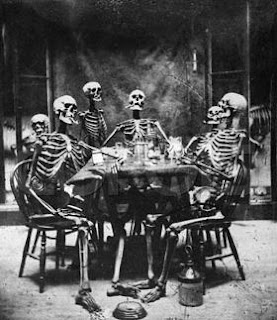 ****
Possibility of a trip to the Museum of Mourning Photograhy (http://mourningphotography.com/) was discussed. John is coordinating a trip (or multiple trips) via email.
Possibility of a cemetery tour was discussed. Specifically mentioned was Bachelor’s Grove, though its unclear whether they give tours or we would need to sneak in.
In order to schedule some physical workshops for the Collective, Anthony is going to email John some available 3Pear dates which have come open. John will then use those to determine the best times to have workshops.
One-off performance ideas are needed. Specifically, the Collective should be thinking of ideas for spaces in which to do these performances. Basements, theaters, alleys, public places, etc.
We talked about using a wiki to track some of our ideas/collaborations, but it was brought up that a wiki is more of a central repository of information. If the blog is insufficient for our purposes, we should consider moving to a message board-style format.
Questions were raised about how to be notified when comments are posted on the blog. Evan has since discovered that this feature exists in the blog settings. Up to ten email addresses can be added.
Kurt and Peter talked a bit about using video and images in our work. Specifically mentioned were Resurrection Mary (a popular Chicago ghost), death photography (and the idea that trying to preserve something kills it), and investigating the history of cremation.
I was told to write down “witches don’t have souls.” I drew a little scale with a witch on one side and a duck on the other.
Anthony brought up the fact that when firing squads would perform executions, only one member of the squad would be given a real bullet. No one knew who this person was. This served to relieve the conscience of the firing squad members. It is an example of a disconnect between intention and act.
One-off shows:
How does the audience enter? How do we treat them?
Perhaps there should be a death survey: How do you want to die? Would you like to have the real bullet or the fake bullet?
We need to drum up a test audience for our audience boxes.
We should look into French horror theater, aka Grand-Guignol.

The audience boxes should limit perspective. Perhaps we can incorporate a video delay so the audience member sees what happened to the box just before they got in, or what happened to the previous person in the box. We could take a photo of the audience member and their friends all standing around the box, like a mourning photo. We could have these available as the audience leaves.
The boxes should be built and then given to the Fools to design. Lee Valley Hardware was mentioned as a potential resource for materials/plans.
Death is not a unique experience, perhaps we should survey the audience and somehow use that information. A death mad lib?
The tech for the boxes should include sound. Perhaps we can work it out so that each box its own sound system. Ideas: convey the impression of being buried alive, someone speaking to you through dirt and wood. Have claw/nail marks inside the boxes.
Images that were brought up: refrigerator filled with a person, emerging from the boxes at the start of the show, having different light sources for each coffin.
We should somehow acknowledge the fact that we are directly above a funeral home.
We had some meta-discussion about how to make the show itself more accessible to the audience. We need to be considerate of how we frame the experience, i.e. what happens before our section should somehow clue the audience in to what they are getting ready to experience.
Death is a visceral topic and there are many social taboos around it. The taboo against “morbidness” would be an interesting thing to explore through our one-off shows and then incorporate into the final.
We can also deal with how those left behind deal with death. The traditions are too numerous to mention. Is it celebration, mourning, etc? How do people meld and mix together all the emotions surrounding death into a cultural tradition?
Maybe the goal for the audience is to survive.
Is there a narrative through which we explore all of this? A mission? “Resurrect the dead girl?” Can we have an “audience corpse”? Perhaps the audience is the manipulator of the show.
Action Item: think about box types for different audience types.
Should the Fool Collective propose a show for film fest? A really bad horror film? A silent film?
***
Posted by The Fool Machine Collective at 2:17 PM

"Possibility of a cemetery tour was discussed. Specifically mentioned was Bachelor’s Grove, though its unclear whether they give tours or we would need to sneak in."

I recently found some more links related to Bachelor's Grove. There's a whole site devoted to it.

And what appears to be a message board, with only one message posted thus far:

Based on these sites, I think it is possible to organize a formal visit, without having to worry about sneaking in and/or getting caught by the police.

I can look into this and get back to y'all.

Also, an idea just off the top of my head, take it or leave it; perhaps during the one-off performances audience members relate personal death experiences/tales (however they want to interpret that) via audio recording, then the recordings are later mixed and used in some way as part of the Chaos of Death performance during Fear.

I'm bummed I missed that meeting, and I can't make the next one.

I think that what Anthony meant was that one person was NOT given a real bullet (or was given a blank cartridge). If only one person in the squad had real bullets, the firing squad might be ineffective. But by not telling the squad who had the blanks, they could all believe that they did not fire the fatal shot.