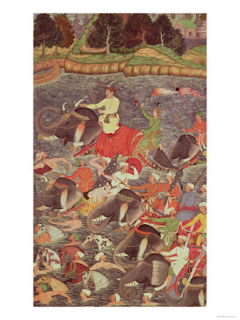 I was watching Iconoclasts on the Sundance Channel with Mike Myers and Deepak Chopra. They talked about death quite a bit. Three really good stories that I hope I can remember properly.

One was Chopra going to deliver his father's ashes to the River Ganges. A man comes down and asks him questions about his father and his family in order to record them, as is tradition. So, Chopra and the man go inside the building where these records are kept. The man shows him that his father did the same thing for his parents. And, if he wished, Chopra could leave a note for his own children when they did the same for him. He did. Now, when his children go to place his ashes in the Ganges, they can view a message from their father, wishing them love from beyond the grave.

Myers and Chopra were doing an improvised interview and discussion for the show. They stood in a theatre and just talked in front of an audience. Death was brought up. Look behind you and you'll see death following. Look behind you again and he's even closer. Look again. Even closer. And the audience was laughing during this, which was his point. This is how humans deal with the knowledge of our own mortality. We laugh. We can't help it. Which, explains why so much comedy comes out of pain. This quote has been assumed to be taken by a few different comedians, so I won't specify anyone. “Tragedy is when I stub my toe. Comedy is when you fall into an open manhole and die.”

Myers was always a fan of The Beatles. When George Harrison died, he was devastated. Then, he got a letter. It was the last letter Harrison ever wrote and it was written for him. See, Myers always felt so sad at the end of A Hard Day's Night. Because, when the helicopter flew away at the end, he wanted to be on it. In this letter, Harrison wrote how he was a fan and that he was sorry he had to fly away on the helicopter without him again.

posted by: Shaina Lyn-Waitsman
Posted by The Fool Machine Collective at 12:10 PM

I think families spend (valuable) time creating traditions celebrating life - for example, this Christmas, I worked with my brother to create a storytelling Christmas Eve tradition for my nieces...but we don't spend as much time creating new traditions for death. Besides the usual preparations made - last will and testament, cremation/burial plans, etc.

I think that, as a parent, to take time to create new traditions to help your children deal with your death is a wonderful thing. My father is currently working on a humongoid never-ending book about his thoughts on metaphysics, religion, etc. - and I'm apparently not allowed to read the whole thing until he dies. I'm scared it's going to be a really complicated read. That it might be boring. And I know I'll treasure it, but I'm really hoping that there will be a page of mundane sentimentalities: I miss you. These were my favorite memories. You're the awesomest kid ever. Etc. Maybe a t-shirt that says, "My father died and all I got was this lousy book about the universe."

I would like to be really conscious of that when I have children. What messages do I want to leave behind? and maybe I'll start a book of post-its with all my post-death thoughts.