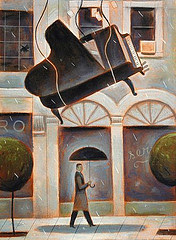 So I was inspired by both Peter and Ryan's last blogs, about death dreams and ear spiders, respectively. Ryan, thank you for triggering my gag reflex. Anyhow, my first reaction was "Wow. Spiders in my ear. That's like, my greatest fear." And then I vetoed that thought because my greatest fear, ever since I was about four years old, is being crushed by a piano.

Needless to say when we were moving the pianos up the back stairs for Fluxus I 'bout done had a heart attack as I stood on the landing squeezing my intestines and feeling my jaw petrify from bone into stone.

I don't know whether this fear came from the fact that I was forced to play the piano when I was a child; I knew instinctively that it wasn't my forte and I was afraid I wasn't going to be quite good enough at it. Or whether I just hated practicing and thoughts of death by piano was actually a rebellious fantasy. All I know is that I would often stare at our beautiful antique stand-up piano and imagine myself under it, being pressed, contained, suffocated, more afraid of being conscious while it was happening than of the pain itself.

I also had a recurring dream of infinity, where I would be forced into some repetitive act in the afterlife, and again, the fear of being conscious during this endless afterlife overrode any fear of pain. The first dream that I can remember, again when I was four years old, was that I was stuck in a piano key, a miniature me, forever and ever conscious of the white ivory walls as I was played, pressed, contained, suffocated. Only you can't suffocate when you are dead, can you?

I wasn't an overly-morbid four-year old. But what are the images that we initially associate with when we first become conscious of death? Why? And are we interested in the why, or more interested in the physical reactions to these images? The what. I like the what, because I often feel like it's not my job to ask why. You could ask why for eternity, and never find the answer. And that would be suffocating.
Posted by Tanya at 7:23 AM

I agree, spiders in one's ear is freaky, but what terrified me more was that episode of the Twilight Zone when the guy found out that earwigs had made a home in his ear and then they said--"They are in his brain. And there are babies." Aaaaaaah!

I can't think of what image I first became associated with when it came to death, but two things come to mind. First, when Doc was shot by the terrorists in "Back to the Future," and Marty shouted "No! You bastards!" (It was also the first time I had ever heard the word "Bastard"). Movies played a large part in getting me associated with death growing up.

The second is when I was fourteen and I attended the wake of my grandmother. As I stood in front of her coffin, viewing her body, curiosity began to overwhelm me: she died of cancer and she her body was so small, so thin, and coated in layer upon layer of alive-human-being-colored makeup. I wanted so much to touch her, to know what death felt like. Carefully, sneakily, I did. She was hard and cold, and it frightened me. That is an image I have never been able to shake off; her body, but also her feel.

Lately my biggest fear has been freezing to death; dying of hypothermia. Walking in this winter weather I am struck by involuntary mental images from James Cameron's "Titanic" and the fate of one unfortunate crew member from Danny Boyle's "Sunshine." To go into death already cold is very scary, and feels terribly lonely.

I rarely if ever have dreams about me dying, they are mostly dreams that seem normal, mundane, and then it is discovered that someone is dead. I will have dreams about my dad, or my friend Peter. We are in a normal situation, being driven home form school, or working on a play, and then I will realized this person is dead. And I tell them, I don't have to tell them, it's not like they don't know it. Mostly they just look at me with a deadpan expression and then just leave.

The other type of dead dreams I have are similar yet give a completely different feeling. It's a normal day and then it is brought up that someone has been missing for a long time, perhaps years, and then I get a panic and realize that I may have killed them and buried them. There is moral fear, but mostly a fear of getting caught years later. these dreams I find are hard to wake up from.

I think that last one was supposed to be on a different post, but it works here.

Mine is brain tumor. when I was about 14 I thought I had a brain tumor. My head would go numb and I got dizzy all the time, and my hair was falling out. I was always a kid who didn't like to complain so I never told my mom, I just suffered through, building my paranoia. I never really figured out what it was, but I know that as a calm person, that most of my anxiety physicalizes itself in these type of symptoms.

I'm a professional piano teacher, and I love that picture of the falling piano at the top of your page! Would you please tell me, what is the name of the painting and who is the artist? Where did you find it? I would like to hang it in my studio!