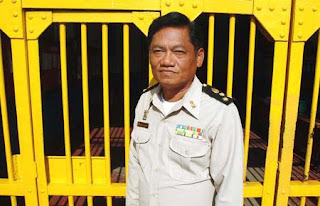 Bilal is correct in verifying Anthony's comment; one shooter is given a blank. This way, everyone in the squad can assume that they were the one with the blank. There is a psychological phenomenon called "diffusion of responsibility" that describes this feeling. Wikipedia article.

I also found this page about modern firing squad rituals from all around the world, including, to my shock and horror, Utah.

Here's a segment from a paragraph on Thailand.

On the day of execution, the prisoner was taken from their cell and photographed and fingerprinted. They were then taken to the execution chamber and handcuffed to a cross like wooden frame with their back to the machine gun, 4 meters behind them. A white cloth blindfold is applied and the hands tied with a sacred Buddhist cord. Flowers are hung from the prisoner’s hands as an offering to Buddha and a canvas screen is pulled between the condemned and the gun. A target is fixed onto the screen level with the prisoner’s heart and the gun aimed at the centre of the target. The executioner takes up his position, watching another member of the execution team who raises a red flag, and on the signal from the prison governor, the flag is dropped and the executioner fires a fully automatic burst of 15 rounds into the victim’s heart.

The picture is of Thailand's last shooting executioner. The country officially moved to lethal injection in 2003. An interview with him is available here.
Posted by Kurt Chiang at 4:27 PM

Britain’s government will soon pardon all of the 306 British soldiers its army shot for cowardice during World War I. The men were killed for committing military offences during the Great War. Britain’s Secretary of Defence Des Browne said: “I believe a group pardon…is the best way to deal with this.” The government decided to clear the soldiers’ names ninety years after they died. Mr. Browne added: "Although this is a historical matter, I am conscious of how the families of these men feel today.” The government considered the campaign made by the family of Harry Farr, who was shot, aged 25, in 1916 for disobeying orders to return to the fighting. Farr’s family battled for 14 years to clear his name.

Harry Farr will be the first British soldier to have his name cleared. His crime was “misbehaving before the enemy in such a manner as to show cowardice”. It took just 20 minutes for a court to decide he should die. It seems the judges ignored medical records that showed Farr was unfit to fight. He had fought in bloody battles for two years. In one particular battle, 20,000 British soldiers died in fighting. Mr. Farr spent five months in hospital with severe shell-shock. His nurses said he was so stressed that he could not hold a pen and write. When his officers ordered him to go back and fight, he replied: “I just can’t go on.” When he died, he didn’t wear a blindfold so the firing squad would have to look him in the eye as they shot him.

I wrote that last post because we wondered if the blindfold is more for the executioners than the excused. This doesn't shed a light on its origin but it does point out the effect the excused believed he could make on the consciences of the executioners.