The Lasts of the Lines

Some deaths clearly represent more than others. Though disruptions to particular lives might be great, most individuals pass without causing anything approaching epochal perturbations to the worlds they leave behind. Conversely, the deceased rarely carry the weight of cultural tradition and continuity into the Beyond. Even the deaths of world political and religious leaders don’t cause societies to cease to function for any real period of time. Certainly nations may mourn, people may intensely reflect, and power struggles may ensue, but daily rituals resume, memories persist, and life goes on. Except when it doesn’t.

One question that has come to mind now and again as part of this project is how to get an audience to move beyond simply the death of an individual (or even large groups of individuals) to experience those rare instances when much more than a body and life goes to the grave. What does it mean when a sizeable piece of supposedly collective memory, a language, or even an entire culture dies with a solitary person? What happens when the things known and experienced by the dead cannot even be comprehended by any other living soul on earth. What does the individual experience when they look forward to see the inevitable and look back and side to side-to-see that they are truly the last of a line? As performers, writers, and researchers is there anything we can do to convey that experience to an audience?

* * * * *
This has nothing whatsoever to do with I Am Legend. I did not see the movie, though I read the book years ago and can imagine it could fit with the theme. The initial inspiration for this post was a story that I remembered coming out of Canada about a year ago. Six hundred sixteen thousand six hundred and thirty-six Canadians fought in the First World War. As of the November 2006, there were three left alive, all over age 105. As the disappearance of this generation approached, the Canadian Parliament passed a resolution to hold a state funeral for last surviving veteran. By February '07 Lloyd Clemett died, leaving only two. Percy Wilson died a few months later. This left only John Henry Foster Babcock, 146th Battalion, Canadian Expeditionary Force.

If you think that seemed like a morbid sweepstakes to win, you weren't the only one embracing it. A survey taken in Fall 2006 found that 75% of Canadians were in favor of the state funeral. It seemed a venerable way to commemorate the loss of a direct connection to a significant moment in the nation's history. The problem was that none of the veterans alive at the time of the resolution's approval wanted the honor. The three agreed that bestow the honor on one could not possibly commemorate all of them. The deeds and death of one could not possibly carry the weight of all that history and experience. (To make matters more intriguing, Babcock never saw action and has actually lived in Spokane, WA since the 1920s. He will die an American citizen.)

* * * * *
Two much more dramatic examples of cultural extinction come to mind. The first is that of Dolly Pentreath who died in her home in Mousehole, Cornwall, England in December 1777. Dolly is widely acknowledged as the last native speaker of Cornish on Earth. There were no documented native speakers after her death, though the language has survived in snippets and revival attempts in the centuries following her death. One estimate has the total number of fluent, non-native Cornish speakers at 300. 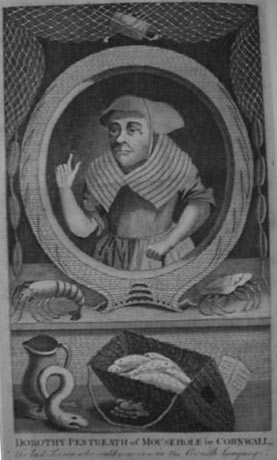 Much has been mythologized about Dolly Pentreath. Stories abound about the fish-wife (though she never married an actual man) and her cursing, beer drinking, and pipe smoking. Most of all there was her refusal to use anything, but Cornish though she spoke English. Legend has it that her final words were "Me ne vidn cewsel Sawznek!" ("I don't want to speak English!").

Regardless of the specific truths behind Dolly lore, it does seem as if she knew that she may be the last true speaker of her beloved Cornish. This was largely due to her story being recorded in-person by antiquarian Daines Barrington. It is certainly possible that Barrington found her by chance and not because she was the true last speaker. Nevertheless the question remains: how might we convey to an audience the understanding of death by someone facing death not only as a human, but as the carrier of a tradition and culture they hold to so fiercely.

* * * * *
San Nicolas was home to a tribe of Native Americans about whom little is known. They probably spoke a language from the widespread Uto-Aztecan family, but when The Lone Woman of San Nicolas was eventually brought from the island to the mainland at the request of missionaries, none of the local Indian translators were able to communicate with her. The decline of the San Nicolas population probably began shortly after contact with Europeans in the 17th century due to disease and/or resource and trading pressures brought by the settlers. A crisis point was reached between 1810 and the mid-1830s as fleets of Russian and Aleut fur trappers hunting the island's large seal population sparred more frequently with the indigenous population. In 1835, missionaries evacuated everyone from the island, except one 20-something woman who was believed to be missing her child.

The woman was baptized as Juana Maria in the final weeks of her life. For the 18 years prior she lived alone on the island of San Nicolas, about 50 miles off the coast near Los Angeles. She was finally brought from the island by Captain George Nidiver. Because no one was able to communicate with her beyond crude sign language, we do not know what life was like alone on the island or how she reacted to being the last of her people to live any semblance of a traditional life on their ancestral island.

It does appear that she lived reasonably well under the circumstances. She was described as being in good health and eagerly interacted with Capt. Nidiver and his crew. Further, she was said to be "astonished and delighted" by the "civilization" she found on the mainland, perhaps indicating that she may have believed that she would never see people or society again. Sadly, she contracted dysentery shortly after reaching the mainland and never recovered. She would die under the care of Capt. Nidiver's wife, but without any knowledge of the fate of her people and with an unknowable sense of her place in her people's history.
Posted by evandebacle at 4:50 PM