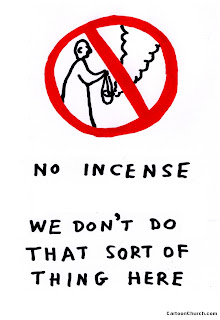 Though this isn't something I read or watched, it was something that I thought was a fantastic story. My uncle just passed away last week, two days before the Asian New Year. Sunday was his funeral, I was unable to go because it was in California.

Anyhow, my brother was standing outside with my aunt, uncle, and cousin, and this is how that conversation went (P.S. it was a Buddhist funeral):

Brother: Uncle Ted, are you okay?
Uncle Ted: (Wiping eyes) Yeah, I just can't handle the incense. It drives me crazy.
Crazy Aunt: Yeah, I can't stand it in there! Do me a favor, when I die, forget all this fucking chanting. Just throw me a fuckin' party!
Disillusioned Cousin #4058: If I have an open casket, I want to be buried naked. Just let it all hang out...
(sound of gong)