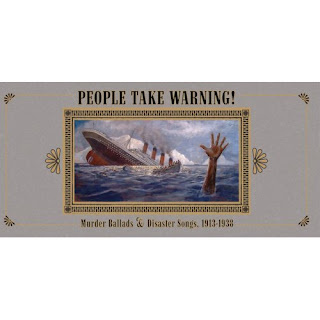 Several weeks ago a newly released boxed set of murder ballads and disaster songs from the early years of the twentieth century called "People Take Warning!" was reviewed on NPR.

A few of the song titles:

I would love to listen to some of these tracks, to experience how death cultivated art for the ears eighty years ago. They sing of death, and now dead themselves, they are memorialized in this box set and available on Amazon.com. So it goes. People often sing of sorrow, and murder and death still rise to the surface in todays music--for some reason, "Jany's Got a Gun" comes to mind, although I am sure there are stronger contemporary examples out there--but these tunes, just from their titles, speak of an unashamed examination of death. There's no veiled language here, no metaphors, just Death, exactly as he stands. No frills, no fear. Just Death.
Posted by Dinabear at 11:13 AM

i agree, this is quite the opportunity...though i will refrain from making obvious 'puns'.

funny the proliferation of bands with death in their names too...
The Grateful Dead
Death Cab For Cutie (based on a Bonzo Dog Band song, too)
The Dead 60s
The Dead Boys
Death
Napalm Death
The Deathray Davies (ha)
Sonic Death Monkey (ha x2)
My Dying Bride
etc...

much food for thought!

ps I do have a fabulous version of 'Poor Ellen Smith' by Neko Case...a great banjo flecked tune.

Here are some more current murder ballads that I can think of:

Bob Dylan has written some really good murder ballads. 'The Ballad of Hollis Brown' gives me chills. With pretty minimal lyrics Dylan builds up an enormous sense of hopelessness before Hollis Brown brings about his horrible end. 'The Lonesome Death of Hattie Carroll', on the same album, is also a good murder ballad.

Simon and Garfunkle have a song called Richard Cory. It is pretty much a take off of a poem by Edwin Arlington Robinson. It is kind of a murder ballad...in a way...sort-ov. Has anyone heard it? would you consider it a murder ballad?

Leonard Cohen has a good song about Joan of Arc being burrned at the stake.

Atlantic City by Springsteen might be a murder ballad. I think its about a guy whose going to go kill some people and might get killed himself and he wants to spend a nice last night with his lady in Atlantic City. Its actually probably not a murder ballad but would fit nicely in a death mix.

'Nick Cave has a whole album of murder ballads. It is called Murder Ballads. Some of them are pretty good.

Also I have a good version of 'Poor Ellen Smith' by John Hasbrouck (a local musician) it would be interesting to play this song back to back with Johnny's Nico Case version and the version of the box set.

I just realized - on that same album (Sounds of Silence) Paul Simon follows the murder ballad up with a suicide ballad entitled 'A Most Peculiar Man'. What a "Side 2" that is!


...and I just thought of a whole other topic that's been written about to death (sorry) - the 'Paul is Dead' hoax...